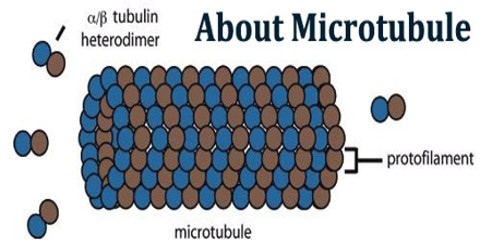 Microtubules are cytoplasmic tubules that serve as the structural component of cytoskeleton, cilia, and eukaryotic flagella. They are found throughout the cytoplasm and it forms a component of the cytoskeleton. They undergo frequent assembly and disassembly within a cell.  They play a vital role in the process of cellular process. Their main function is to maintain a structure of a cell and their movements. In some cells, they are responsible for the separation of chromosomes during mitosis and in locomotion. Microtubules are nucleated and organized by microtubule organizing centers (MTOCs), such as the centrosome found in the center of many animal cells or the basal bodies found in cilia and flagella, or the spindle pole bodies found in most fungi. There are many proteins that bind to microtubules, including the motor proteins kinesin and dynein, severing proteins like katanin, and other proteins important for regulating microtubule dynamics. Recently an actin-like protein has been found in a gram-positive bacterium Bacillus thuringiensis, which forms a microtubule-like structure and is involved in plasmid segregation.

Structure and Functions of Microtubules

Microtubules are the largest cytoskeletal filaments in cells, with a diameter of 25 nanometers. They are made out of subunits called tubulin. Each tubulin subunit is made up of one alpha and one beta tubulin that are attached to each other, so technically tubulin is a heterodimer, not a monomer. In a microtubule structure, tubulin monomers are linked both at their ends and along their sides (laterally). This means that microtubules are quite stable along their lengths. Microtubules are involved in nucleic and cell division, organization of intracellular structure, and intracellular transport, as well as ciliary and flagellar motility. Because the functions of microtubules are so critical to the existence of eukaryotic cells (including our own), it is important that we understand their composition, how they are assembled and disassembled, and how their assembly/disassembly and functions are regulated by cells. Other than support, organelle movement, and cell division, microtubules also play a part in forming large structures on the outside of the cells. Microtubules can combine in very specific bundles to form cilia and flagella for cell movement. One of the unique and more interesting features of microtubules is their polymerization behavior. It it is useful to first present some details about the structure of these polymers. Microtubules are hollow cylinders of about 25 nm in diameter constructed from the protein tubulin. Heterodimers of α- and β-tubulin attach in a head-to-tail fashion to form polar protofilaments, and 13 of these protofilaments join together to form the closed tube.

Although changing the polymerization conditions can modulate the rates of catastrophe and rescue, both polymerizing and depolymerizing microtubules can be observed within a given population, indicating that this is an intrinsic property of the polymer.

There are numerous factors that have made the in-depth study of microtubule polymerization very challenging: the cylindrical structure of microtubule, the presence of 13 protofilaments from which growth can occur, the relatively fast hydrolysis of GTP, and the intrinsic instability of these polymers. The microtubule can dynamically switch between growing and shrinking phases in this region. Tubulin dimers can bind two molecules of GTP, one of which can be hydrolyzed subsequent to assembly. Although most microtubules have a half-life of 5-10 min, certain microtubules can remain stable for hours. These stabilized microtubules accumulate post-translational modifications on their tubulin subunits by the action of microtubule-bound enzymes.