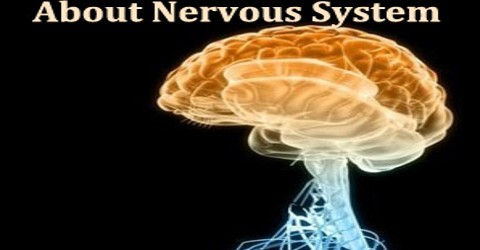 The nervous system of vertebrates is a complex information-processing system that consists mainly of the brain, spinal cord, and peripheral and autonomic nerves. It receives chemical information from hormones in the circulating blood and can also regulate secretions of the endocrine system by the action of neurohormones. It is the system of neurons and tissues that regulates the actions and responses of vertebrates and many invertebrates. The nervous systems of invertebrates vary from a simple network of nerves to a complex nerve network under the control of a primitive brain. The only multicellular animals that have no nervous system at all are sponges, placozoans, and mesozoans, which have very simple body plans. The nervous systems of the radially symmetric organism’s ctenophores (comb jellies) and cnidarians, which include anemones, hydras, corals and jellyfish, consist of a diffuse nerve net. All other animal species, with the exception of a few types of worm, have a nervous system containing a brain, a central cord or two cords running in parallel, and nerves radiating from the brain and central cord. Structure and Functions of Nervous System

In most cases, the brain is the final destination point for information gathered by the rest of the nervous system. Once data arrives, the brain sorts and files it before sending out any necessary commands. The brain is divided into many different sections, including the cerebrum and brain stem. These parts handle pieces of the brain’s overall workload, including storing and retrieving memory and making body movement’s smooth.

Although the brain is the control center, its job would not be possible without the spinal cord, which is the major conduit for information traveling between brain and body.

Peripheral system nerves branch from either the brain stem or the spinal cord. Each nerve is connected to a particular area of the torso or limbs and is responsible for communication to and from those regions.

The PNS can also be subdivided into smaller components: the somatic and autonomic systems. The somatic involves parts of the body a person can command at will, and the autonomic helps run involuntary functions such as pumping blood. The nervous system can suffer from a number of afflictions, including cancer (e.g., brain tumors). Other problems include multiple sclerosis, in which damaged nerves prevent signals from traveling along them, and meningitis, which causes an inflammation of the membranes surrounding the brain and spinal cord. The nervous system is involved in receiving information about the environment around us (sensation) and generating responses to that information (motor responses). The nervous system can be divided into regions that are responsible for sensation (sensory functions) and for the response (motor functions). But there is a third function that needs to be included. Sensory input needs to be integrated with other sensations, as well as with memories, emotional state, or learning (cognition). Some regions of the nervous system are termed integration or association areas. The process of integration combines sensory perceptions and higher cognitive functions such as memories, learning, and emotion to produce a response.

The nervous system can be divided into two parts mostly on the basis of a functional difference in responses. The somatic nervous system (SNS) is responsible for conscious perception and voluntary motor responses. Another part of the nervous system is the Autonomic Nervous System. It has three parts:

The sympathetic nervous system: This nervous system controls the nerves of the inner organs of the body on which humans have no conscious control. This includes the heartbeat, digestion, breathing (except conscious breathing) etc.

The parasympathetic nervous system: The nerves of the autonomic nervous system enervate the smooth involuntary muscles of the (internal organs) and glands and cause them to function and secrete their enzymes etc.