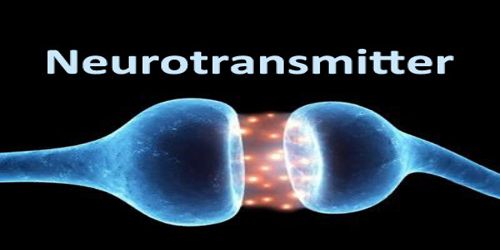 Neurotransmitter is a chemical substance that is produced and secreted by a neuron and then diffuses across a synapse to cause excitation or inhibition of another neuron. Acetylcholine, norepinephrine, dopamine, and serotonin are examples of neurotransmitters. It is also known as chemical messengers or chemical transmitter. Neurotransmitters are released from synaptic vesicles in synapses into the synaptic cleft, where they are received by receptors on the target cells. Many neurotransmitters are synthesized from simple and plentiful precursors such as amino acids, which are readily available from the diet and only require a small number of biosynthetic steps for conversion. Neurotransmitters play a major role in shaping everyday life and functions. Their exact numbers are unknown, but more than 100 chemical messengers have been uniquely identified.

Neurotransmitters are formed in a presynaptic neuron and stored in small membrane-bound sacks, called vesicles, inside this neuron. When this neuron is activated, these intracellular vesicles fuse with the cell membrane and release their contents into the synapse, a process called exocytosis. Slower-acting neurotransmitters act by binding to proteins that are sometimes called G-protein-coupled receptors (GPCRs). These receptors do not form ion channels upon activation and have a very different architecture than the ion channels. The protein structure of a GPCR is one protein subunit folded so that it transverses the membrane seven times. These receptors are referred to as G-coupled protein receptors because they function through an interaction with a GTP -binding protein, called G-protein for short. Binding of neurotransmitters may influence the postsynaptic neuron in either an inhibitory or excitatory way. This neuron may be connected to many more neurons, and if the totals of excitatory influences are greater than those of inhibitory influences, the neuron will also “fire”. Ultimately it will create a new action potential at its axon hillock to release neurotransmitters and pass on the information to yet another neighboring neuron.

In addition, over 50 neuroactive peptides have been found, and new ones are discovered regularly. Many of these are “co-released” along with a small-molecule transmitter. Nevertheless, in some cases a peptide is the primary transmitter at a synapse. β-endorphin is a relatively well-known example of a peptide neurotransmitter because it engages in highly specific interactions with opioid receptors in the central nervous system.