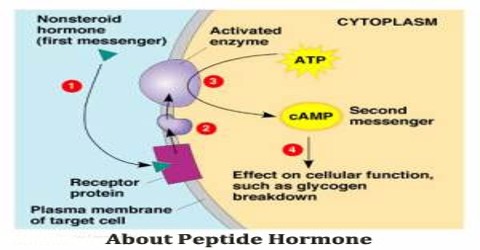 Hormones act as biologic messengers carrying information from one tissue through the blood to a distant tissue. The role of a hormone is one of a chemical messenger in the human endocrine system. Peptides are small protein that can help to boost naturally occurring hormones which are in charge of the regulation of many biological activities including growth, development, reproduction, the use of energy and its storage, electrolytes and water balance. Protein-based hormones, more commonly called peptide hormones, are made up of amino acids, which are the structural building blocks of all proteins, including the proteins we eat. Peptide hormones tend to be globular, meaning that they have a ball-like shape. They also tend to be water-soluble, meaning they can dissolve in and travel easily through the blood.

Several important peptide hormones are secreted from the pituitary gland. The anterior pituitary secretes three: prolactin, which acts on the mammary gland; adrenocorticotropic hormone (ACTH), which acts on the adrenal cortex to regulate the secretion of glucocorticoids; and growth hormone, which acts on bone, muscle, and the liver. The posterior pituitary gland secretes antidiuretic hormone, also called vasopressin, and oxytocin. Peptide hormones are produced by many different organs and tissues, however, including the heart (atrial-natriuretic peptide (ANP) or atrial natriuretic factor (ANF)) and pancreas (glucagon, insulin and somatostatin), the gastrointestinal tract (cholecystokinin, gastrin), and adipose tissue stores (leptin)

According to “Advanced Nutrition and Human Metabolism,” peptides also function as structural elements of the body. For example, the peptides actin and myosin are important structural components of muscle. Peptides also contribute to bone shape and strength. Bone and muscle not only provide structure to the body, but are also involved in movement and provide protection to internal organs. Structure-activity studies have shown that different segments of adjacent amino acid residues have a specific function in the interaction of each of these hormones with its receptors. This kind of organization of hormonal information is called sychnologic; it is the basic for the pleiotropic action of the opiomelanocortin peptides, i.e. the ability of related peptides to interact with different types of receptors in different target cells. Labelled peptide hormones with radioactive, fluorescent, or photolabile groups at defined sites are a prerequisite for studying hormone-receptor interaction. Multi-labelled derivatives of alpha-MSH are suitable for degradation and intracellular incorporation studies. Photoaffinity labelling of melanophore receptors with azidophenyl-containing analogues of alpha-MSH produces an irreversible stimulation of pigment cells. Covalent conjugates between peptide hormone receptors. These conjugates exhibit remarkable properties such as superpotency, strongly enhanced receptor affinity and prolonged action.

Hormones are normally present in the plasma and interstitial tissue at concentrations in the range of 10-7M to 10-10M. Because of these very low physiological concentrations, sensitive protein receptors have evolved in target tissues to sense the presence of very weak signals. In addition, systemic feedback mechanisms have evolved to regulate the production of endocrine hormones. Tissues capable of responding to endocrines have 2 properties in common: they posses a receptor having very high affinity for hormone, and the receptor is coupled to a process that regulates metabolism of the target cells. Receptors for most amino acid-derived hormones and all peptide hormones are located on the plasma membrane. Activation of these receptors by hormones leads to the intracellular production of a second messenger, such as cAMP, which is responsible for initiating the intracellular biological response. Steroid and thyroid hormones are hydrophobic and diffuse from their binding proteins in the plasma, across the plasma membrane to intracellularly localized receptors. The resultant complex of steroid and receptor bind to response elements of nuclear DNA, regulating the production of mRNA for specific proteins.

Unlike steroid hormones, which can cross through a cell’s membrane and enter the cell, peptide hormones can’t pass through the membrane. This is because cell membranes consist of fatty compounds called phospholipids, and protein-based hormones are water-soluble, not fat-soluble. Instead, peptide hormones bind to receptors on the outside of cells, which triggers a response inside the cell. Depending upon the specific peptide hormone in question, cellular responses vary significantly, but cells generally respond very quickly to peptide hormones. Perhaps the most widely recognized of the peptide hormones is insulin, which helps you regulate blood sugar after a meal. Glucagon, another blood sugar-regulating hormone, is also a peptide, as are prolactin and oxytocin. Prolactin stimulates milk production, while oxytocin stimulates milk letdown in lactating women. Oxytocin also stimulates feelings of emotional closeness in both men and women, and is sometimes colloquially known as the “cuddle hormone.”