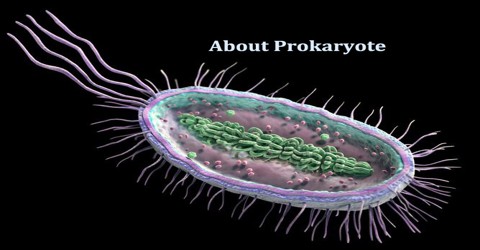 Prokaryote is any of a wide variety of one-celled organisms of the kingdom Monera, that are the most primitive and ancient known forms of life. At the molecular level, prokaryotes differ from eukaryotes in the structure of their lipids and of certain metabolic enzymes, and in how genes are expressed for protein synthesis. Prokaryotes reproduce asexually and include the bacteria and blue-green algae. Prokaryotes are filled with cytoplasm and contain very few and basic internal structures. The genetic information is carried on circular pieces of DNA. There may be only one piece of DNA or many pieces of DNA. The only organelles, or internal structures that exist in prokaryotes are ribosomes, which make proteins needed by the organism. Prokaryotes include Archaea, bacteria and cyanobacteria.

Structure and Function of Prokaryotes

Many prokaryotic cells have sphere, rod, or spiral shapes, as shown below – Many prokaryotes have a sticky outermost layer called the capsule, which is usually made of polysaccharides (sugar polymers).

The capsule helps prokaryotes cling to each other and to various surfaces in their environment, and also helps prevent the cell from drying out. In the case of disease-causing prokaryotes that have colonized the body of a host organism, the capsule or slime layer may also protect against the host’s immune system.

All prokaryotic cells have a stiff cell wall, located underneath the capsule (if there is one). This structure maintains the cell’s shape, protects the cell interior, and prevents the cell from bursting when it takes up water.

The cell wall of most bacteria contains peptidoglycan, a polymer of linked sugars and polypeptides. Peptidoglycan is unusual in that it contains not only L-amino acids, the type normally used to make proteins, but also D-amino acids. Archaeal cell walls don’t contain peptidoglycan, but some include a similar molecule called pseudopeptidoglycan, while others are composed of proteins or other types of polymers5, 6. Some of the antibiotics used to treat bacterial infections in humans and other animals act by targeting the bacterial cell wall.

Prokaryotes aren’t “supposed” to have internal compartments like the organelles of eukaryotes, and for the most part, they don’t. However, prokaryotic cells sometimes need to increase membrane surface area for reactions or concentrate a substrate around its enzyme, just like eukaryotic cells. Because of this, some prokaryotes have membrane folds or compartments functionally similar to those of eukaryotes. Prokaryotic cells often have appendages (protrusions from the cell surface) that allow the cell to stick to surfaces, move around, or transfer DNA to other cells. Longer appendages, called pili (singular: pilus), come in several types that have different roles. For instance, a sex pilus holds two bacterial cells together and allows DNA to be transferred between them in a process called conjugation.  The most common appendages used for getting around, however, are flagella (singular: flagellum). These tail-like structures whip around like propellers to move cells through watery environments.

The plasma membranes of archaea have some unique properties, different from those of both bacteria and eukaryotes. For instance, in some species, the opposing phospholipid tails are joined into a single tail, forming a monolayer instead of a bilayer. This modification may stabilize the membrane at high temperatures, allowing the archaea live happily in boiling hot springs. The basic building block of the plasma membrane is the phospholipid, a lipid composed of a glycerol molecule attached a hydrophilic (water-attracting) phosphate head and to two hydrophobic (water-repelling) fatty acid tails. The phospholipids of a eukaryotic or bacterial membrane are organized into two layers, forming a structure called a phospholipid bilayer. Prokaryotes have diversified greatly throughout their long existence. The metabolism of prokaryotes is far more varied than that of eukaryotes, leading to many highly distinct prokaryotic types.

Prokaryotes live in nearly all environments on Earth. Some archaea and bacteria thrive in harsh conditions, such as high temperatures (thermophiles) or high salinity (halophiles). Organisms such as these are referred to as extremophiles.[26] Many archaea grow as plankton in the oceans. Symbiotic prokaryotes live in or on the bodies of other organisms, including humans.