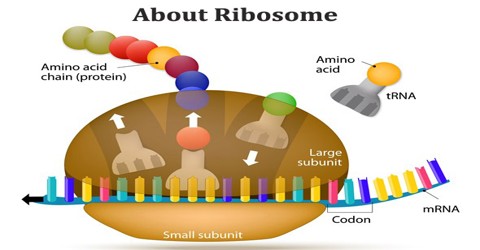 Ribosome is a sphere-shaped structure within the cytoplasm of a cell that is composed of RNA and protein and is the site of protein synthesis. Ribosomes are free in the cytoplasm and often attached to the membrane of the endoplasmic reticulum. Ribosomes exist in both eukaryotic and prokaryotic cells. Plastids and mitochondria in eukaryotic cells have smaller ribosomes similar to those of prokaryotes. Ribosomes are composed of rRNA and proteins. They exist free in the cytoplasm until they receive an mRNA message to translate. When they receive it, they waste no time in cracking the code. Ribosomes can either be free ribosomes in the cytoplasm of the cell or they may find that the mRNA they are translating has a specific destination. In this case, some ribosomes will attach themselves to another cellular structure, and this is called the endoplasmic reticulum. Proteins produced by bound ribosomes are usually destined for some kind of specific structures, or they’re meant to exit the cell through exocytosis.

Structure and Function of Ribosomes The ribosomes found in chloroplasts and mitochondria of eukaryotes also consist of large and small subunits bound together with proteins into one 70S particle. These organelles are believed to be descendants of bacteria and, as such, their ribosomes are similar to those of bacteria. The various ribosomes share a core structure, which is quite similar despite the large differences in size. Much of the RNA is highly organized into various tertiary structural motifs, for example pseudoknots that exhibit coaxial stacking. The extra RNA in the larger ribosomes is in several long continuous insertions, such that they form loops out of the core structure without disrupting or changing it. All of the catalytic activity of the ribosome is carried out by the RNA; the proteins reside on the surface and seem to stabilize the structure.

Ribosomes are sometimes referred to as organelles, but the use of the term organelle is often restricted to describing sub-cellular components that include a phospholipid membrane, which ribosomes, being entirely particulate, do not. Ribosomes are found throughout the cell, with their locations reflecting the destination of the proteins they produce. The Nucleous – In a eukaryotic cell, a cell with a nucleus, ribosomes begin in a specialized part of the nucleus called the nucleolus. The nucleolus is a cluster of DNA containing genes that carry the code for one ribosomal component, a molecule called ribosomal RNA that is closely related to DNA. Ribosomal RNA is synthesized and bound to proteins in the nucleolus, then exported from the nucleus to form ribosomes. Prokaryotic cells, which lack nuclei, perform this process in the cytoplasm.

The Endoplasmic Reticulum – Eukaryotic cells have cytoplasmic structures that prokaryotic cells lack. One such structure is the endoplasmic reticulum, or ER, a series of membrane-enclosed channels where the cell makes compounds for use beyond its own cytoplasm. Many ribosomes attach themselves to the ER to make proteins, becoming fixed ribosomes. Proteins made in the ribosome-dotted part of the ER, called “rough ER,” are shipped through ribosome-free smooth ER to become components of the cell membrane or products for other cells to consume.

Mitochondria and Chloroplasts – Some especially complex structures inside eukaryotic cells contain their own genetic material. Mitochondria, which generate energy by breaking down carbohydrates, and chloroplasts, which store energy as sugar for plants, algae and some fungi, have their own DNA along with ribosomes to read its instructions. These ribosomes are small, like prokaryote ribosomes, but still help mitochondria and chloroplasts make proteins, supporting the idea that these structures evolved from bacteria that came to live within larger cells.