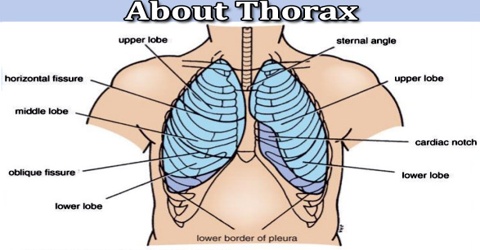 Thorax (or Chest) is the part of the body cavity from the neck or head to the abdomen, containing the heart, lungs, etc.; chest: in mammals, the diaphragm separates it from the abdomen. The thorax includes the thoracic cavity and the thoracic wall. Its walls are formed by the 12 pairs of ribs, attached to the sides of the spine and curving toward the front. The principal organs in the thoracic cavity are the heart with its major blood vessels and the lungs with the bronchi, which bring in the body’s air supply. The chest and the abdomen make up the torso on the human body. Another name for the torso is the trunk. Basically, it is the body without the head or limbs. The chest contains the heart and lungs, while the abdomen houses the digestive system, including the stomach, small intestines, large intestines, liver and pancreas. Numerous major blood vessels, such as the aorta and the inferior vena cava, are in this major section of the body, as well as the spine and a number of important muscles and bones.

Structure and Functions of Thorax

Thorax (or Chest) is a conical cavity with a rigid supporting skeleton formed by the dorsal vertebra behind, the breast bone in front, and the ribs and rib cartilages on the sides. Between and over these lie muscles and the whole is covered air-tight by the skin outside and the pleura inside. Above, it is closed by the muscles and other organs of the neck; and below by a movable bottom, the diaphragm. The air-tight chamber thus bounded can be enlarged in all three diameters, but especially in the vertical, and in that running from the spinal column to the breastbone. The shape of the chest does not correspond to that part of the thoracic skeleton that encloses the heart and lungs. All the breadth of the shoulders is due to the shoulder girdle, and contains the axillae and the heads of the humeri.

Thorax has a bony structure protecting the vital internal organs. During respiration, the muscular diaphragm draws air into the thorax by creating a vacuum.

Part of the circulatory system, respiratory system and digestive tract of an insect is housed in its thoraxes. The foregut, similar to a mammalian stomach, is in the insect thorax. The major blood vessel of the insect, similar to the mammalian heart, is also located inside the thorax. Thorax is the center of respiration and circulation in an animal’s body. It contains the heart, lungs and associated major blood vessels. In insects, the legs and wings are all attached to the thorax. Different types of diseases or conditions that affect the chest include pleurisy, flail chest, atelectasis, and the most common condition, chest pain. These conditions can be hereditary or caused by birth defects or trauma. Any condition that lowers the ability to either breathe deeply or to cough is considered a chest disease or condition.