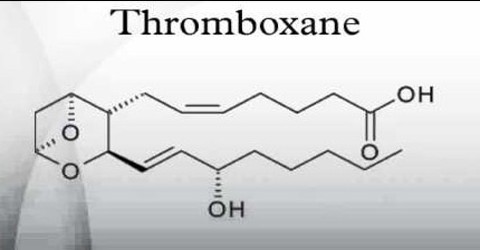 Thromboxane is a lipid essential to the body’s production of clots. To stop bleeding, the lipid simultaneously restricts arteries and veins while clumping platelets. Platelets produce thromboxane through conversion of certain prostaglandins. In individuals with high blood pressure and/or high cholesterol, the lipid has a negative effect by restricting arteries and causing arterial plaque buildup. Aspirin inhibits the production of thromboxane, reducing one’s chances of suffering a first or second heart attack. The two major thromboxanes are thromboxane A2 and thromboxane B2. The distinguishing feature of thromboxanes is a 6-membered ether-containing ring. The thromboxanes are derived from arachidonic acid and are related to prostaglandins. Aspirin acts by inhibiting the COX enzyme from synthesizing precursors of thromboxane in platelets thereby reducing platelet aggregation.

There are two thromboxanes. Thromboxane A2 (TXA2) is active but is very unstable and has a half-life of only 30 seconds before it undergoes hydrolysis to form thromboxane B2 (TXB2) which is inactive. It is a type of thromboxane that is produced by activated platelets and has prothrombotic properties; it stimulates activation of new platelets as well as increases platelet aggregation. This is achieved by increasing expression of the glycoprotein complex GPIIb/IIIa on the cell membrane of platelets. The same effect is also achieved by ADP in platelet stimulation, which is blocked by clopidogrel. Circulating fibrinogen binds these receptors on adjacent platelets, further strengthening the clot. Thromboxane A2 is also a known vasoconstrictor and is especially important during tissue injury and inflammation. It is also regarded as responsible for Prinzmetal’s angina. It is an inactive metabolite/product of thromboxane A2. It is almost completely cleared in the urine. It itself is not involved in platelet activation and aggregation in case of a wound, but its precursor, thromboxane A2, is. Thromboxane A2 synthesis is the target of the drug aspirin, which inhibits the COX-1 enzyme.

An olive oil fraction containing DHPE can inhibit platelet aggregation and thromboxane B2 formation in vitro.

The primary function of thromboxane is to stop bleeding. When the body experiences a cut, the lipid assists platelets in clumping so that the platelets can eventually form a clot. This process begins when the lipid narrows the arteries leading to the cut site. This action makes the platelets’ job easier by reducing blood pressure and limiting overall blood loss. The body’s platelets produce thromboxane from arachidonic acid. This process is significant as prostacyclin, a platelet produced lipid that inhibits clot formation, is also created from arachidonic acid. These two lipid compounds normally act in homeostasis within the human body, the balance only changing during and immediately after a bleeding event. In certain instances, though, this balance becomes upset.

Thromboxane is a vasoconstrictor and a potent hypertensive agent, and it facilitates platelet aggregation. It is in homeostatic balance in the circulatory system with prostacyclin, a related compound. The mechanism of secretion of thromboxanes from platelets is still unclear. They act in the formation of blood clots and reduce blood flow to the site of a clot.

Role of Thromboxane A2 in Platelet Aggregation

Thromboxane A2 (TXA2), produced by activated platelets, has prothrombotic properties, stimulating activation of new platelets as well as increasing platelet aggregation. Platelet aggregation is achieved by mediating expression of the glycoprotein complex GP IIb/IIIa in the cell membrane of platelets. Circulating fibrinogen binds these receptors on adjacent platelets, further strengthening the clot. The released thromboxane A2 acts as a positive feedback mediator in the activation and recruitment of more platelets to the primary hemostatic plug. Thromboxane A2 exerts its actions via specific G protein-coupled receptors and has been described as either a potent platelet agonist or as a weak agonist with an important role in amplifying the response of platelets to more potent agonists.