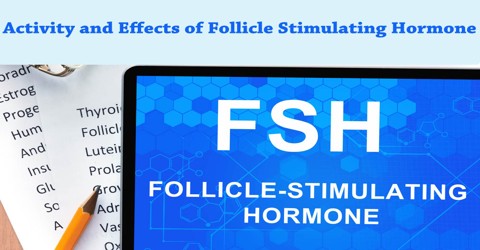 Follicle Stimulating Hormone or FSH is a glycoprotein hormone, and the FSH receptor (FSHR), a G protein-coupled receptor, play central roles in human reproduction. It is a gonadotrophic hormone secreted by the pituitary gland that stimulates maturation of ovarian follicles in female mammals and growth of seminiferous tubules in males. The central role of FSH in human reproduction makes its receptor a unique pharmaceutical target in the field of fertility regulation. FSH acts by binding to the FSH receptor (FSHR) on the granulosa cell surface in ovaries and the Sertoli cell surface in testes. The stimulated receptor leads to the dissociation of α- and βγ- subunits of G protein heterotrimer inside the cell. The α-subunit activates adenylyl cyclase, resulting in an increase of cAMP levels, and ultimately leads to the increased steroid production that is necessary for follicular growth and ovulation in women. The free βγ dimers recruit G protein-coupled receptor (GPCR) kinases to the receptor, which, in turn, lead to the recruitment of β-arrestin to the receptor. FSH is used clinically for controlled ovarian stimulation in women treated with assisted reproductive technologies and also for the treatment of anovulatory infertility in women and hypogonadotropic hypogonadism in men.

Follicle Stimulating Hormone (or FSH)-like activity of human chorionic gonadotrophin (HCG) preparations was assayed by the method based on the ovarian weight augmentation in intact immature rats. The action characteristic of follicle-stimulating hormone (FSH), a gonadotrophic glycoprotein hormone secreted, in mammals, by the anterior pituitary gland. Upon receptor binding, FSH stimulates growth of Graafian follicles in the ovaries in females, and stimulates the epithelium of the seminiferous tubules to increase spermatogenesis. However, when in intact immature rats the ovarian weight response to HCG preparations was compared at a wide range of doses (40 to 51 200 IU) to that obtained with a human menopausal gonadotrophin (HMG) preparation (0.5 to 128 IU of FSH) in the presence of 40 IU of HCG, significant differences were found. The assays conducted in hypophysectomised immature female rats were invalid, because of lack of parallelism. Control of FSH release from the pituitary gland is unknown. Low frequency gonadotropin-releasing hormone (GnRH) pulses increase FSH mRNA levels in the rat, but is not directly correlated with an increase in circulating FSH. FSH is subject to oestrogen feed-back from the gonads via the hypothalamic pituitary gonadal axis.

The data indicate that the FSH-like activity of HCG preparations is neither due to a contamination by FSH of pituitary origin, nor is it an evenly distributed intrinsic property of the HCG molecules. It is also concluded that the gonadotrophic activity of biologically pure HCG in immature hypophysectomised female rats consists of a specific stimulation of the interstitial cell apparatus. Such HCG preparations do not induce any follicle stimulation, not even when administered in excessive doses.

Side Effects of Follicle Stimulating Hormone In addition to its needed effects, some unwanted effects may be caused by Follicle Stimulating Hormone (or FSH). In the event that any of these side effects do occur, they may require medical attention.