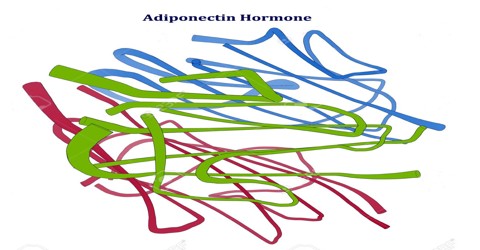 Adiponectin Hormone secreted by adipose tissue that seems to be involved in energy homeostasis; it enhances insulin sensitivity and glucose tolerance, as well as oxidation of fatty acids in muscle. It is involved in regulating glucose levels as well as fatty acid breakdown. Adipocytes produce and secrete a number of proteins, including leptin, adipsin, properdin, and tumor necrosis factor (TNF). An adipose tissue-specific factor was isolated and termed APM1 (AdiPose Most abundant gene transcript 1). The protein product of APM1 is adiponectin. The APM1 gene maps to chromosome 3q27.

Structure and Functions of Adiponectin

Adiponectin stimulation of its receptors, AdipoR1 and AdipoR2, increases the activities of 5′ AMP-activated protein kinase (AMPK) and peroxisome proliferator-activated receptor (PPAR), respectively, thereby contributing to healthy longevity as key anti-diabetic molecules. AdipoR1 and AdipoR2 were predicted to contain seven transmembrane helices with the opposite topology to G-protein-coupled receptors. There are four distinct regions of adiponectin. The first is a short signal sequence that targets the hormone for secretion outside the cell; next is a short region that varies between species; the third is a 65-amino acid region with similarity to collagenous proteins; the last is a globular domain. Overall this protein shows similarity to the complement 1Q factors (C1Q). However, when the 3-dimensional structure of the globular region was determined, a striking similarity to TNFα was observed, despite unrelated protein sequences. The physiological role of adiponectin has not yet been fully elucidated, but it is believed that it has the ability to reduce glucose, triglycerides, and free fatty acids and that it plays a major role in the pathogenesis of metabolic syndrome. Metabolic syndrome comprises a cluster of metabolic disorders that give rise to such metabolic risk factors as visceral obesity, insulin resistance, hyperglycaemia, dyslipidaemia, and hypertension. In addition, numerous experimental and clinical observations have shown decreased adiponectin bioactivity in obesity and obesity-related complications, including insulin resistance, diabetes, cardiovascular diseases, and non-alcoholic fatty liver disease (NAFLD). Adiponectin is secreted into the bloodstream where it accounts for approximately 0.01% of all plasma protein at around 5-10 μg/mL (mg/L). In adults, plasma concentrations are higher in females than males, and are reduced in diabetics compared to non-diabetics. Weight reduction significantly increases circulating concentrations. PPARγ is a member of the PPAR subfamilies of transcription factors, which is expressed mainly in adipose tissue and which is considered to be a positive regulator of adiponectin gene expression. Targeted deletion of PPARγ in adipose tissue of mice results in marked adipocyte hypocellularity and hypertrophy, elevated levels of plasma free fatty acids and triglyceride, and decreased levels of adiponectin.