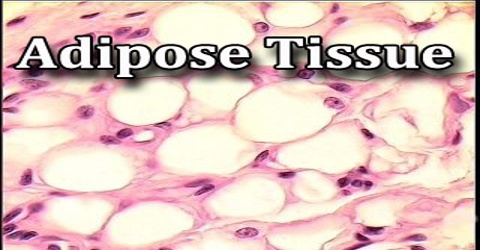 Adipose tissue is a connective tissue consisting chiefly of fat cells surrounded by reticular fibers and arranged in lobular groups or along the course of one of the smaller blood vessels. Adipose refers to tissue made up of mainly fat cells such as the yellow layer of fat beneath the skin. In addition to adipocytes, adipose tissue contains the stromal vascular fraction (SVF) of cells including preadipocytes, fibroblasts, vascular endothelial cells and a variety of immune cells such as adipose tissue macrophages. Structure and Functions of Adipose Tissue

Adipose Tissue is a loose fibrous connective tissue packed with many cells also called “adipocytes” that are specialized for storage of triglycerides more commonly referred to as “fats”. Each adipocyte cell is filled with a single large droplet of triglyceride (fat). As this occupies most of the volume of the cell, its cytoplasm, nucleus, and other components are pushed towards the edges of the cell – which is bounded by the plasma membrane. Adipose tissues also secrete a type of cytokines (cell-to-cell signalling proteins) called adipokines (adipocytokines), which play a role in obesity-associated complications. Perivascular adipose tissue releases adipokines such as adiponectin that affect the contractile function of the vessels that they surround. It is found directly beneath the skin, between muscles, around the kidneys and heart, behind the eyeballs, and abdominal membranes. It serves as a layer of protection, absorbing shock potentially sustained by the tissue.

In humans, the distribution of adipose tissue in the body can vary depending on sex. In general, men accumulate fat around the waist, and women tend to accumulate more fat around the hips than the waist. Geneticists have located distinct regions in the human genome that are associated with fat distribution, and several genes in particular appear to have a greater influence on waist-to-hip ratio in women than in men. Because these genes are involved in regulating the activities of fat cells, knowledge of their precise functions could provide insights into the biological mechanisms underlying obesity, diabetes mellitus, and cardiovascular disease.

Adipose tissue is also a means of energy storage. Food that is excess to requirements is converted into fat and stored within adipose tissue in the body.