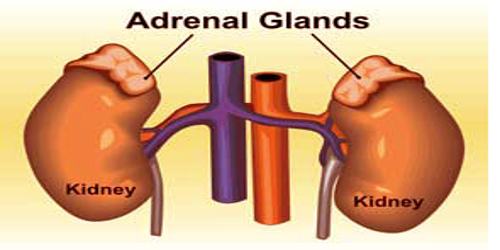 Adrenal gland is a small gland located on top of the kidney. The outer portion, or cortex, secretes steroid hormones (corticosteroids). The inner portion, or medulla, secretes epinephrine and norepinephrine. Each gland has an outer cortex which produces steroid hormones and an inner medulla. The adrenal cortex itself is divided into three zones: zona glomerulosa, the zona fasciculata and the zona reticularis. The adrenal glands produce hormones that help control heart rate, blood pressure, the way the body uses food, the levels of minerals such as sodium and potassium in the blood, and other functions particularly involved in stress reactions.

A number of endocrine diseases involve dysfunctions of the adrenal gland. Overproduction of cortisol leads to Cushing’s syndrome, whereas insufficient production is associated with Addison’s disease. Congenital adrenal hyperplasia is a genetic disease produced by dysregulation of endocrine control mechanisms. A variety of tumors can arise from adrenal tissue and are commonly found in medical imaging when searching for other diseases.

Structure and Functions of Adrenal Gland

The adrenal glands are located on both sides of the body in the retroperitoneum, above and slightly medial to the kidneys. Each adrenal gland has two parts. The cortex (outer layer) is controlled by the pituitary gland and produces several corticosteroid hormones, the most important of which affect metabolism and blood pressure. The cortex also secretes small amounts of male sex hormones (androgens). The medulla (core) influences the autonomic nervous system by releasing the hormones epinephrine (adrenaline) and norepinephrine (noradrenaline), which increase heart activity and blood flow in response to excitement or stress. Stimulation: The adrenal cortex is affected by ACTH from theanterior pituitary. The adrenal medulla is stimulated by nerve impulsesthat originate in the hypothalamus and travel through the brainstem, spinalcord, and sympathetic nerves.

The adrenal gland secretes a number of different hormones which are metabolised by enzymes either within the gland or in other parts of the body. These hormones are involved in a number of essential biological functions.

The normal function of the adrenal gland may be impaired by conditions such as infections, tumors, genetic disorders and autoimmune diseases, or as a side effect of medical therapy.