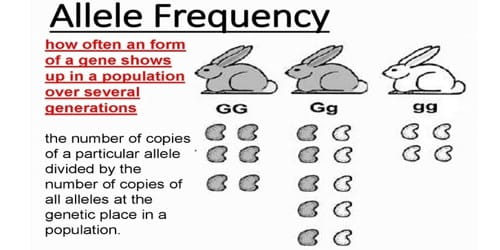 Allele frequency refers to the different forms of a gene at a single position on a chromosome. It refers to how frequently a particular allele appears in a population. It is the proportion of a given allele to all alleles at the same locus. It refers to how common an allele is in a population. It is usually expressed as a percentage. It can be represented as a decimal, a percentage, or a fraction.

Allele frequencies may be used to describe genetic diversity in a population. It is determined by counting how many times the allele appears in the population then dividing by the total number of copies of the gene. If the frequency of any allele is above 1% it is probable that natural selection is maintaining it at this level. This is because the natural mutation rate of an allele is almost always much lower than 1%. It is different from genotype frequency or phenotype frequency.

It is the term used to describe the fraction of gene copies that are of a particular allele in a defined population. The term allele refers to one variant gene out of several possibilities for a particular locus in the DNA. Changes in allele frequencies over time can indicate that genetic drift is occurring or that new mutations have been introduced into the population. When all but one allele go away, one only remains. That allele is said to be fixed.