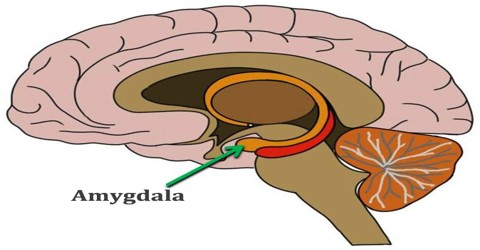 Amygdala is an almond-shaped mass of gray matter in the front part of the temporal lobe of the cerebrum that is part of the limbic system and is involved in the processing and expression of emotions, especially anger and fear. The amygdala is an important part of the brain, which assists in responses of fear and pleasure. The abnormal working of the amygdaloid body can lead to various clinical conditions including developmental delay, depression, anxiety, and autism.

Structure and Functions of Amygdala

The structure is a small part of the brain and is closely associated with the hypothalamus, cingulated gyrus, and hippocampus. Smelling, motivation, and emotional responses are facilitated by the olfactory and limbic systems, which are partially made up of the amygdaloid body. The amygdaloid body was named for its almond shape. Amydale is the Greek word for “almond,” and eidos is the Greek word for “like.” Directionally, the amygdala is located deep within the temporal lobes, medial to the hypothalamus and adjacent to the hippocampus. The amygdala helps to store memories of events and emotions so that an individual may be able to recognize similar events in the future. The amygdala in humans also plays a role in sexual activity and libido, or sex drive. It can change in size and shape based on the age, hormonal activity, and gender of the individual.

The amygdala is involved in several functions of the body including:

The amygdala is also involved in the modulation of memory consolidation. Following any learning event, the long-term memory for the event is not formed instantaneously. Rather, information regarding the event is slowly assimilated into long-term (potentially lifelong) storage over time, possibly via long-term potentiation. Recent studies suggest that the amygdala regulates memory consolidation in other brain regions. Also, fear conditioning, a type of memory that is impaired following amygdala damage, is mediated in part by long-term potentiation. Hyperactivity of the amygdala or having one amygdala that is smaller than the other has been associated with fear and anxiety disorders. Fear is an emotional and physical response to danger. Anxiety is a psychological response to something that is perceived as dangerous. Anxiety can lead to panic attacks that occur when the amygdala sends signals that a person is in danger, even when there is no real threat.