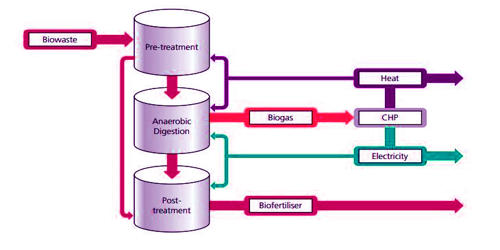 Anaerobic digestion is the process by which organic matter such as animal or food waste is broken down to produce biogas and biofertilizer. It is a sequence of processes by which microorganisms break down biodegradable material in the absence of oxygen. The process is used for industrial or domestic purposes to manage waste or to produce fuels. This process happens in the absence of oxygen in a sealed, oxygen-free tank called an anaerobic digester. Much of the fermentation used industrially to produce food and drink products, as well as home fermentation, uses anaerobic digestion.

Anaerobic digestion occurs naturally in some soils and in the lake and oceanic basin sediments, where it is usually referred to as “anaerobic activity”. This is the source of marsh gas methane as discovered by Alessandro Volta in 1776. The successful application of anaerobic technology to the treatment of solid wastes is critically dependent on the development and the use of high rate anaerobic bioreactors.

The digestion process begins with bacterial hydrolysis of the input materials. Insoluble organic polymers, such as carbohydrates, are broken down to soluble derivatives that become available for other bacteria. Acidogenic bacteria then convert the sugars and amino acids into carbon dioxide, hydrogen, ammonia, and organic acids. The biogas that is generated is made mostly of methane, the primary component of natural gas. The non-methane components of the biogas are removed so the methane can be used as an energy source. AD is the process where microorganisms convert organic material in the absence of oxygen into mainly carbon dioxide and methane. The methane gas produced may be collected and used directly as a fuel for cooking or heating, or it can be burned to generate electricity. 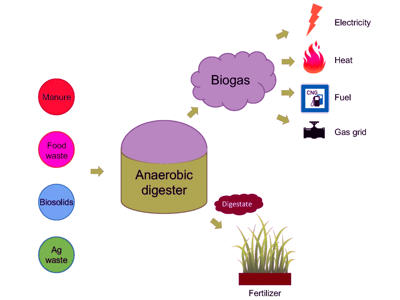 In Acetogenesis, bacteria convert these resulting organic acids into acetic acid, along with additional ammonia, hydrogen, and carbon dioxide. Finally, methanogens convert these products to methane and carbon dioxide. The methanogenic archaea populations play an indispensable role in anaerobic wastewater treatments. Every tonne of food waste recycled by anaerobic digestion as an alternative to landfill prevents between 0.5 and 1.0 tonne of CO2 entering the atmosphere, one of the many benefits of anaerobic digestion.

Anaerobic digestion is widely used as a source of renewable energy. The process produces a biogas, consisting of methane, carbon dioxide, and traces of other ‘contaminant’ gases. The technology of anaerobic digestion allows the use of biodegradable waste for energy production by breaking down organic matter through a series of biochemical reactions. This biogas can be used directly as fuel, in combined heat and power gas engines or upgraded to natural gas-quality biomethane. The nutrient-rich digestate also produced can be used as fertilizer.