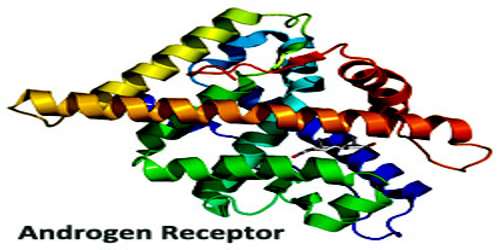 Androgen receptor is a key mediator of androgen function within normal and malignant prostate cells. It is mainly expressed in androgen target tissues, such as the prostate, skeletal muscle, liver, and central nervous system (CNS), with the highest expression level observed in the prostate, adrenal gland, and epididymis as determined by real-time polymerase chain reaction (PCR). It is also known as NR3C4 (nuclear receptor subfamily 3, group C, member 4), is a type of nuclear receptor that is activated by binding either of the androgenic hormones, testosterone, or dihydrotestosterone in the cytoplasm and then translocating into the nucleus. The androgen receptor gene is more than 90 kb long and codes for a protein that has 3 major functional domains: the N-terminal domain, DNA-binding domain, and androgen-binding domain. The protein functions as a steroid-hormone activated transcription factor. Androgen regulated genes are critical for the development and maintenance of the male sexual phenotype.

Androgen receptor mutations occur in low frequency in primary prostate cancer. In contrast, cells in distant metastases and recurrent prostate cancer after androgen ablation often contain androgen receptor mutations. AR ligands can either be classified based on their structure (steroidal or nonsteroidal) or based on their ability to activate or inhibit transcription (agonists or antagonists).

Structure and Functions of Androgen Receptor

Androgen receptor (AR) comprises three main functional domains: the N-terminal transcriptional regulation domain, the DNA binding domain (DBD) and the ligand binding domain. The N-terminal domain of the AR is the most variable, whilst the DBD is the most highly conserved region between the different members of the steroid hormone nuclear receptor family. Via the Androgen receptor, androgens play a key role in the maintenance of male skeletal integrity. The regulation of this integrity by androgen receptor (AR) signaling can be attributed to both osteoblasts and osteocytes.