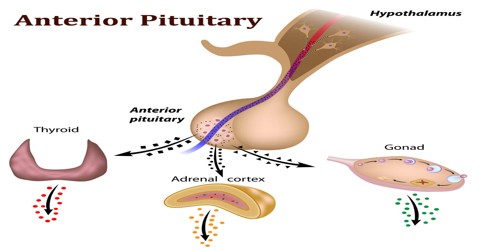 Anterior pituitary is a gland at the base of the brain in vertebrate animals that is divided into two regions, anterior and posterior, each of which secretes important hormones. Hormones secreted by the anterior pituitary influence growth, sexual development, skin pigmentation, thyroid function, and adrenocortical function. These influences are exerted through the effects of pituitary hormones on other endocrine glands except for growth hormone which acts directly on cells. In the anterior pituitary there are 2 main different kinds of cells: acidophil and basophil, the names of the cells is due to the affinity of the colorant used in histochemistry (acid or basic colorant). Proper functioning of the anterior pituitary and of the organs it regulates can often be ascertained via blood tests that measure hormone levels.

Structure and Functions of Anterior Pituitary Effects of the Anterior Pituitary