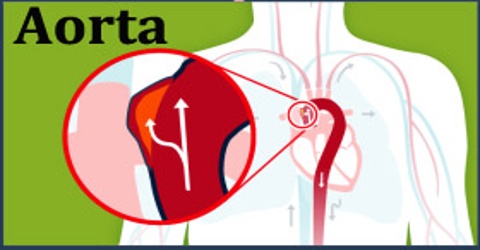 Aorta is the main artery of the circulatory system, arising from the left ventricle of the heart in mammals and birds and carrying blood with high levels of oxygen to all the arteries of the body except those of the lungs. The word ‘Aorta’ stems from the Late Latin Latin: aorta from aortē (Greek: ἀορτή), from aeirō, “I lift, raise” (Greek: ἀείρω) This term was first applied by Aristotle when describing the aorta and describes accurately how it seems to be ‘suspended’ above the heart. The aorta is traditionally divided into the ascending aorta, the aortic arch, and the descending aorta. The descending aorta is, in turn, subdivided into the thoracic aorta that descends within the chest and the abdominal aorta that descends within the belly. The function of the aorta has been documented in the Talmud, where it is noted as one of three major vessels entering or leaving the heart, and where perforation is linked to death.

The heart is the organ of the cardiovascular system that functions to circulate blood along pulmonary and systemic circuits. The aorta arises from the left ventricle of the heart, forms an arch, and then extends down to the abdomen where it branches off into two smaller arteries. Several arteries extend from the aorta to deliver blood to the various regions of the body.

Structure and Functions of Aorta

The aorta is a tube about a foot long and just over an inch in diameter. The aorta is divided into four sections: The walls of the aorta consist of three layers. They are the tunica adventitia, the tunica media, and the tunica intima. These layers are composed of connective tissue, as well as elastic fibers. These fibers allow the aorta to stretch to prevent over-expansion due to the pressure that is exerted on the walls by blood flow.