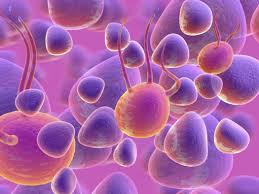 The cell is the smallest unit of life in our bodies. In the body, there are brain cells, skin cells, liver cells, stomach cells, and the list goes on. All of these cells have unique functions and features. And all have some recognizable similarities.

Below is a labelled diagram of a cell to help you identify some of these structures. All cells have a ‘skin’, called the plasma membrane, protecting it from the outside environment. The cell membrane regulates the movement of water, nutrients and wastes into and out of the cell.

In addition to the nucleus, there are many organelles inside of the cell – small structures that help carry out the day-to-day operations of the cell. One important cellular organelle is the ribosome. Ribosome participates in protein synthesis. The transcription phase of protein synthesis takes places in the cell nucleus. After this step is complete, the mRNA leaves the nucleus and travels to the cell’s ribosome, where translation occurs.

Another important cellular organelle is the mitochondrion. Mitochondria (many mitochondrion) are often referred to as the power plants of the cell because many of the reactions that produce energy take place in mitochondria.

Also important in the life of a cell are the lysosomes.  Lysosomes are organelles that contain enzymes that aid in the digestion of nutrient molecules and other materials.

Many animals have skeletons to give their body structure and support. Plants do not have a skeleton for support and yet plants don’t just flop over in a big spongy mess. This is because of a unique cellular structure called the cell wall. The cell wall is a rigid structure outside of the cell membrane composed mainly of the polysaccharide cellulose. As pictured at left, the cell wall gives the plant cell a defined shape which helps support individual parts of plants.

In addition to the cell wall, plant cells contain an organelle called the chloroplast. The chloroplast allows plants to harvest energy from sunlight. Specialized pigments in the chloroplast (including the common green pigment chlorophyll) absorb sunlight and use this energy to complete the chemical reaction: In this way, plant cells manufacture glucose and other carbohydrates that they can store for later use.

All living organisms require energy to conduct the many functions necessary to sustain life. The source of this energy for cells is the chemical bonds of food molecules. Cells can be thought of as chemical factories that conduct a variety of chemical reactions.

The process of converting sunlight energy to chemical-bond energy is photosynthesis. It is one of the major biochemical pathways through which plants produce food molecules such as carbohydrates for themselves as well as for all the other organisms on earth.

Cellular respiration, a second major biochemical pathway, is a series of reactions during which cells release the chemical-bond energy from food and convert it into usable forms.