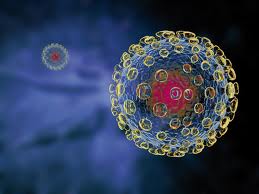 Viral flu is a viral infection. It’s passed on when people breathe in liquid droplets containing the influenza virus that have been sneezed or coughed into the air, or when people touch objects contaminated with the virus. The virus can cause infections all year round, but in the UK it’s most common in the winter. There are many strains, some of which are worse than others, such as swine flu (H1N1 strain).

Symptoms include fever, headache, cough, sore throat and muscle aches. They appear quickly, last for about seven days and generally leave you exhausted for weeks afterwards .

After 5 days, fever and other symptoms have usually disappeared, but a cough and etc weakness may continue. All symptoms are usually gone within a week or two.

virus is a germ that is smaller than a bacteria. Viruses are encapsulated by a protective coating so they are more difficult to kill than bacteria. They are harder to treat because they are not susceptible to antibiotics like bacteria are because of their protective coating.

There are several types of flu. Such as:

The set of symptoms we call a cold, may be caused by one of more than 100 different types of rhinovirus. The large number of different strains makes the chances of an effective vaccine slight. Rhinovirus grows well at relatively low temperatures, such as those found in the nose. This is why it’s rarely found in the trachea or lungs.

Headache, nasal congestion, a clear runny nose, sneezing, scratchy throat, and general malaise may all be symptoms of the common cold. A typical common cold will last three to four days; a mild secondary bacterial infection often prolongs this to a week or longer.

Influenza, commonly referred to as the flu, is an infectious disease caused by RNA viruses of the family Orthomyxoviridae  (the influenza viruses), that affects birds and mammals..

Although it is often confused with other influenza-like illnesses, especially the common cold, influenza is a more severe disease caused by a different type of virus. Influenza may produce nausea and vomiting, particularly in children,[1] but these symptoms are more common in the unrelated gastroenteritis.

In virus classification influenza viruses are RNA viruses that make up three of the five genera of the family Orthomyxoviridae:

This genus has one species, influenza A virus. Wild aquatic birds are the natural hosts for a large variety of influenza A. Occasionally; viruses are transmitted to other species and may then cause devastating outbreaks in domestic poultry or give rise to human influenza pandemics. The type A viruses are the most virulent human pathogens among the three influenza types and cause the most severe disease. The influenza A virus can be subdivided into different serotypes based on the antibody response to these viruses. The stereotypes that have been confirmed in humans, ordered by the number of known human pandemic deaths, in children, gastrointestinal symptoms such as diarrhea and abdominal pain, (may be severe in children.

Influenza B almost exclusively infects humansand is  less common than influenza A. The only other animals known to be susceptible to ferret. This type of influenza mutates at a rate 2–3 times slower than type A and consequently is less genetically diverse, with only one influenza B serotype. As a result of this lack of antigenic diversity, a degree of immunity to influenza B is usually acquired at an early age.

This genus has one species, influenza C virus, which infects humans, dogs and pigs, sometimes causing both severe illness and local epidemics. However, influenza C is less common than the other types and usually only cause’s mild disease in children.

The common sing &symptoms of influenza are: When to Call A Health Professional

Gastroenteritis is inflammation of the stomach, intestines, or both. There are many causes of gastroenteritis; the most numerous cases are caused by viruses, followed by bacteria and other agents.

The major symptoms of gastroenteritis are diarrhea, nausea, vomiting, and abdominal cramps; symptoms usually self-resolve in 2 to 5 days.

The cause of swine flu is an influenza A virus type designated as H1N1. It has this designation or name because of the two major antigens (H and N) detectable on its surface by immunological techniques (H or hem agglutinin and N or neuraminidase).

According to the CDC, like seasonal flu, symptoms of swine flu infections can include:

As with other conditions, more serious symptoms that would indicate that a child with swine flu would need urgent medical attention include:

Swine flu is being treated with antiviral drugs such as Tamiflu and Relenza. Antiviral drugs work by preventing the flu virus from reproducing – to be effective you need to take them within 48 hours of the symptoms beginning. This can reduce the risk of complications and possibly shorten the illness by a day.

Antiviral medicine can cause side effects, such as:

Even if you do feel these symptoms it is important that those prescribed antiviral medicine complete the course, even if symptoms of swine flu clear and you start to feel better quickly.

Bird flu is an infection caused by avian (bird) influenza (flu) viruses (H5N1 virus). These flu viruses occur naturally among birds. Wild birds worldwide carry the viruses in their intestines, but usually do not get sick from them. However, bird flu is very contagious among birds and can make some domesticated birds, including chickens, ducks, and turkeys, very sick and kill the

Symptoms of avian flu infection in humans depend on the strain of virus. Infection with the H5N1 virus in humans causes typical flu-like symptoms, which might include: