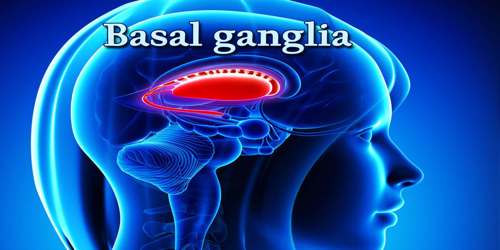 Basal ganglia are a region of the base of the brain that consists of three clusters of neurons that are responsible for involuntary movements such as tremors, athetosis, and chorea. It is also known as basal nuclei, which consists of the corpus stratium (major group of basal ganglia nuclei) and related nuclei. The basal ganglia are involved primarily in processing movement related information. They also process information related to emotions, motivations, and cognitive functions. The basal ganglia communicate with other regions of the brain to allow us to do tasks like driving a car. It’s responsible for executing a skill pattern (something we have had to learn) that we can do with very little thought. Things like riding a bike, tying our shoe, or playing a musical instrument would be classified in this category. The basal ganglia even play a large role in eye movements, allowing someone to direct their gaze to a target and then change their gaze from one target to another.

Structure and Functions of Basal Ganglia

The basal ganglia consist of parallel complementary pathways that process motor, limbic, sensory, and associative information. The basal ganglia of the motor circuit include the caudate nucleus and putamen, the subthalamic nucleus, the globus pallidus externus and internus, and the substantia nigra pars reticulata and pars compacta. The basal ganglia of the limbic circuit, which processes information about motivation and emotion, include the nucleus accumbens (ventral striatum), ventral pallidum, and ventral tegmentum. The striatum, which serves as a gateway for the regulation of signals through the basal ganglia during the learning of actions and the selection of desirable actions, has the most-complex signaling architecture. In addition to receiving vast external excitatory input from the cortex and thalamus, it also contains several types of interneurons (neurons that connect sensory and motor circuits) and some of the highest levels in the brain of the neurochemicals dopamine and acetylcholine.

The pallidum consists of a large structure called the globus pallidus (“pale globe”) together with a smaller ventral extension called the ventral pallidum. The globus pallidus appears as a single neural mass, but can be divided into two functionally distinct parts, called the internal (or medial) and external (lateral) segments, abbreviated GPi and GPe. Physiology – The brain encodes and transmits information between areas in the form of electrical impulses called action potentials. The processing and relaying of information in the basal ganglia is complex, because the majority of neurons release GABA when they fire action potentials, generally inhibiting the activity of cells in the target areas.

The importance of the basal ganglia in generating movements is evident from the rate and pattern of action potentials fired in neurons during the preparation for and execution of movements. The majority of neurons alter their activity after the movement has started, which supports the idea that the basal ganglia are able to fine-tune movements.