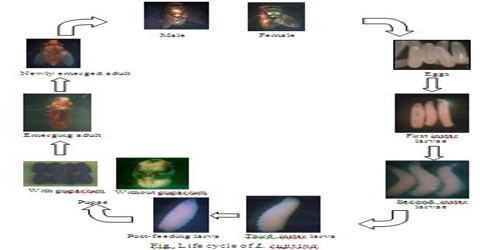 Main purpose of this thesis is to analysis the biological aspects of some blowfly species. The actual feasibility study of while using the Sterile Insect Technique (SIT) will be implemented in Sonadia island so that can control or suppress L. cuprina as an useful, environment friendly technique. In the present study on biological tasks of L. cuprina would be helpful for implementing pre and post release investigations required for evaluating efficacy of SIT control strategy being put in place at Sonadia marine fish drying yards up against the fly pest.

In the present study on biological aspects of L. cuprina would be useful for implementing pre and post release investigations necessary for evaluating efficacy of SIT control strategy being implemented at Sonadia marine fish drying yards against the fly pest .

The biology of L. cuprina  was studied under the laboratory conditions (25±5ºC, R H 70±10% and 12 L:12 D) over a period of one year (July 2006 to June 2007). The work was carried out at the Blowfly Laboratory of Radiation Entomology and Acarology Division, Institute of Food and Radiation Biology, Atomic Energy Research Establishment, Savar, Dhaka. The first instar larva (Fig. 1): It was elongated and white to deep creamy in colour. The early larvae were relatively more transparent than late stage of development. The body was composed of 12 segments.  The 1st instar larva was  relatively broader at the posterior end than the anterior end. The mouth hooks were situated middorsally. The spines were thornlike, black in color and remain backwardly directed. The prothoracic spiracle was a small, simple opening. The paired posterior spiracle possed  a single opening but without any peritreme. The duration of 1st instar larva was 12.80±1.48 hours (Table 2). The mean length and breadth of it was 1.65±0.15 and 0.36±0.04 mm respectively (Table 1).

The third instar larva (Fig. 1):  They were deep creamy to pale brownish in colour. The food materials in the digestive tract were apparent through the body cuticle. The relatively heavy bands of dark, robust and thornlike spines were relatively more prominent than those of the 2nd instar larva. Each of the posterior spiracles was surrounded by a heavily sclerotized peritreme, possessing three slit-like spiracular openings. The spiracles were blackish brown in color. The mean duration of 3rd instar larvae was 36.40±4.39 hours (Table 2). The mean length and breadth of 3rd instar larvae were 10.10±0.57 and 1.45±0.28 mm respectively (Table 1).

Post-feeding larval stage (Fig. 1): At the end of the third instar, the larvae became sluggish and stopped feeding, entered into a wandering phase and generally left the feeding site. It responded negatively to light and usually aggregated on sawdust under the feeding bowl. The post feeding larva underwent a dramatic alteration in shape, became wider and shorter with gradual contraction, hardening, shortening and darkening of cuticle till formation of the pupa. The colour of this stage was brillient creamy white and no food materials were apparent in the body. The mean duration of post feeding larval stage was 22.00±3.16 hours (Table 2). The mean length and breadth of the post-feeding larval stage were 9.70±0.59 and 1.75±0.26 mm, respectively (Table 1).

Pupa (Fig. 1): The squeezed post-feeding larvae underwent a process of pupariation during which the cuticle of the larvae became heavily sclerotized. The type of the pupae were coarctate adecticous. The posterior end of the puparium was relatively round while the anterior end was a little more pointed. Some cuticular characteristics of the third instar larva especially the bands of spines, black sclerotized mouth-hook, anterior and posterior spiracles etc. were retained on the puparium. The pupa changed colouration from creamy white to light brown to red brown and finally to almost blackish brown during the completion of sclerotization in few hours to a day. They were apparently more blackish during adult emergence. The mean duration of pupal stage was 5.00±0.71days (Table 2). The mean length and breadth of the pupae were 6.60±0.39 and 1.85±0.24 mm respectively (Table 1).

Fecundity : The mean fecundity was 906.75±466.03. The mean fecundity during early and late oviposition period were 528.80±303.41 and 378.85±203±54 respectively (Table 4). The result shows that the females during their early reproductive period were more fecund than those of late reproductive period. The fecundity of L. cuprina was significantly greater in early oviposition phase (P< 0.05).