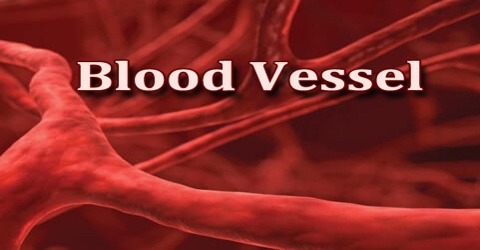 Blood vessel is an elastic tube or passage in the body through which blood circulates; an artery, a vein, or a capillary. There are three major types of blood vessels: the arteries, which carry the blood away from the heart; the capillaries, which enable the actual exchange of water and chemicals between the blood and the tissues; and the veins, which carry blood from the capillaries back toward the heart. Blood vessels are constructed of layers of connective tissue and muscle. The inner blood vessel layer is formed of endothelium. In capillaries and sinusoids, endothelium comprises the majority of the vessel. Blood vessel endothelium is continuous with the inner tissue lining of organs such as the brain, lungs, skin, and heart. In the heart, this inner layer is called the endocardium.

Blood is circulated through the body via the cardiovascular system. This system is comprised of the heart and the circulatory system. Blood vessels carry blood from the heart to all areas of the body. Blood travels from the heart via arteries to smaller arterioles, then to capillaries or sinusoids, then to venules, to veins, and back to the heart. Capillaries, the smallest and most numerous of the blood vessels, form the connection between the vessels that carry blood away from the heart (arteries) and the vessels that return blood to the heart (veins). The primary function of capillaries is the exchange of materials between the blood and tissue cells. The wall of a capillary consists of the endothelial layer surrounded by a basement membrane with occasional smooth muscle fibers.

Veins carry blood toward the heart. After blood passes through the capillaries, it enters the smallest veins, called venules. Systemic veins transport blood from the body tissue to the right atrium of the heart. This blood has reduced oxygen content because the oxygen has been used for metabolic activities in the tissue cells.

Arteries and veins transport blood in two distinct circuits: the systemic circuit and the pulmonary circuit. Systemic arteries provide blood rich in oxygen to the body’s tissues. The blood returned to the heart through systemic veins has less oxygen, since much of the oxygen carried by the arteries has been delivered to the cells. In contrast, in the pulmonary circuit, arteries carry blood low in oxygen exclusively to the lungs for gas exchange. Pulmonary veins then return freshly oxygenated blood from the lungs to the heart to be pumped back out into systemic circulation. The tunica intima (also called the tunica interna) is composed of epithelial and connective tissue layers. Lining the tunica intima is the specialized simple squamous epithelium called the endothelium, which is continuous throughout the entire vascular system, including the lining of the chambers of the heart. It is a single layer of simple squamous endothelial cells glued by a polysaccharide intercellular matrix, surrounded by a thin layer of subendothelial connective tissue interlaced with a number of circularly arranged elastic bands called the internal elastic lamina.

The tunica media is a circularly arranged elastic fiber, connective tissue, polysaccharide substances, the second and third layer are separated by another thick elastic band called external elastic lamina. The tunica media may (especially in arteries) be rich in vascular smooth muscle, which controls the caliber of the vessel. Veins don’t have the external elastic lamina, but only an internal one.

The tunica externa (also called the tunica adventitia), is a substantial sheath of connective tissue composed primarily of collagenous fibers. Some bands of elastic fibers are found here as well. The tunica externa in veins also contains groups of smooth muscle fibers. It also contains nerves that supply the vessel as well as nutrient capillaries (vasa vasorum) in the larger blood vessels.