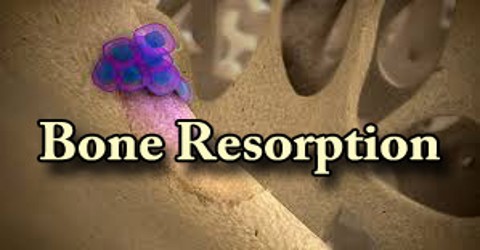 Bone Resorption is the breakdown and absorption of old bone. The process is completed on a local level by bone resorbing cells known as osteoclasts. The resorption process releases calcium into the bloodstream. It is a process involving the breakdown of bone by specialized cells known as osteoclasts. It occurs on a continual level inside the body, with the broken down bone being replaced by new bone growth.

Osteoclasts work by attaching themselves to individual bone cells and secreting compounds to break the cells down, releasing their mineral contents. The minerals enter the bloodstream, where they are processed for recycling to build new bone or eliminated with other bodily wastes. Osteoclasts break down bone in response to inflammation, disease, and injury, removing damaged bone to allow it to be replaced with new bone. The human body is in a constant state of bone remodeling. Bone remodelling is a process which maintains bone strength and ion homeostasis by replacing discrete parts of old bone with newly synthesized packets of proteinaceous matrix. Bone is resorbed by osteoclasts, and is deposited by osteoblasts in a process called ossification.

There are a number of ways to assess for bone resorption. A blood test can reveal the presence of unusually high numbers of minerals in the blood, suggesting a high rate of bone loss. X-rays can reveal losses in bone density, as can bone density scans, performed specifically to look for losses in density. If bone resorption is identified, treatment options can be discussed. It may be possible to address the underlying cause to stop the rate of bone loss, and add supplements to help the patient’s body build new bone. In other cases, treatment may be focused on supportive care to limit the risks associated with losses in bone density. Potassium Bicarbonate (KHCO3) Supplementation Lowers Bone Turnover and Calcium Excretion in Older Men and Women. KHCO3 has favorable effects on bone turnover and calcium excretion, the lower dose appears to be the more effective dose and long-term trials to assess the effect of alkali on bone mass and fracture risk are needed.

Long-term treatments, which can be associated with long-term adverse effects include an increased risk of atypical femur fractures, osteonecrosis of the jaw, gastrointestinal side effects or atrial fibrillation.

Osteoimmunology in 2014: Two-faced immunology-from osteogenesis to bone resorption. Recent advances support the view of the immune system as a central mechanism which can regulate bone homeostasis, regeneration and destruction.

Mechanisms of Bone Resorption in Periodontitis. Bone resorption via osteoclasts and bone formation via osteoblasts are coupled, and their dysregulation is associated with numerous diseases of the skeletal system.

Vitamin D, Parathyroid Hormone, and Acroosteolysis in Systemic Sclerosis. Low levels of vitamin D may reflect silent malabsorption and might be a risk factor for secondary hyperparathyroidism and bone resorption. Osteocytes are the most abundant cells in bone, but their relative inaccessibility and lacks of good in vitro and in vivo models have impeded progress in understanding their functional roles. Compelling evidence points to a mechanosensory function whereby osteocytes regulate bone modeling and remodeling in response to shear or strain forces, but their possible role in calcium and phosphate homeostasis is less clear. The effects of alcohol on bone mineral density (BMD) are well-known and well-studied in animal and human populations. Through direct and indirect pathways, prolonged ethanol exposure increases fracture risk by decreasing bone mineral density and promoting osteoporosis. Indirect effects of alcohol abuse occur via growth hormone, sex steroids, and oxidative stress. Growth hormone is an important regulator of bone growth and remodeling in adults, and it acts via insulin like growth factor to stimulate osteoblastic differentiation.Chronic alcoholism decreases the levels of IGF1, which suppresses the ability of GH to increase bone mineral density.