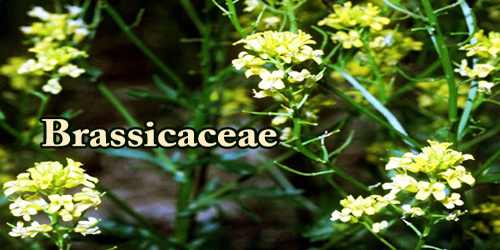 Brassicaceae (/ˌbræsɪˈkeɪsii/) or Cruciferae (/kruːˈsɪfəri/) the mustard family of flowering plants (order Brassicales), composed of 338 genera and some 3,700 species. This is a genus of flowering plants of medium size and economic value commonly known as the mustards, the crucifers, or the cabbage genus. A variety of species are grown as ornamentals, such as basket-of-gold, candytuft, and integrity, and some members of the family are considered invasive species in regions beyond their native range.

There are 372 genera and 4,060 recognized species within the family. Draba (440 species), Erysimum (261 species), Lepidium (234 species), Cardamine (233 species), and Alyssum (207 species) are the most common genera. Plants within the family Cruciferae are usually herbs and may be annuals, biennials, or perennials. Most members of the family Cruciferae are weedy species with short lifecycles just like the radish. The leaves are mostly simple and alternately arranged, and lots of are peppery-flavored. The flowers are cruciform (e.g., within the type of a cross) with four petals and 4 sepals; the plants are commonly named as “crucifers” or “cruciferous” for that reason.

The Mustards sprout rapidly and grow rapidly, flowering and setting seed early in the season before all moisture from the field is lost. Typically the flowers are white, purple, or lavender and have four long, two short stamens and a two-chambered ovary above the other parts of the flower. Some non-native mustard, such as garlic mustard, Alliaria petiolata, an extremely invasive species in the United States, can be toxic to their larvae.

The term Brassicaceae contains New Latin, Brassica’s foreign scientific language, the kind genus, + -aceae, a homogeneous suffix in modern taxonomy for family names. Interestingly, six of our common vegetables were bred from one species of mustard, Brassica oleracea, cabbage, cauliflower, kohlrabi, Brussels sprouts, broccoli, and kale; Brassicaceae have a bisymmetric corolla (left to right, stem to outside, but each quarter is not symmetric), a septum that separates the fruit, lacks stipulations and has simple (although sometimes deeply incised) leaves. The Cleomaceae family of sisters has bilateral symmetrical corollas (left is mirrored by right but stem-side is distinct from out-side), stipulations and mainly palm-divided leaves, and usually no septum.

Plant breeders developed the starch-storage abilities of various parts of the plant to return up with each unique vegetable; commercial mustard is typically made of the seeds of the Brassica nigra mixed with vinegar. Brassicaceae are common on serpentine and dolomite rich in magnesium. Over 100 species within the family accumulate heavy metals, particularly zinc and nickel, which could be a record percentage. Several Alyssum species can accumulate nickel up to 0.3% of their dry weight and will be useful in soil remediation or maybe bio-mining.