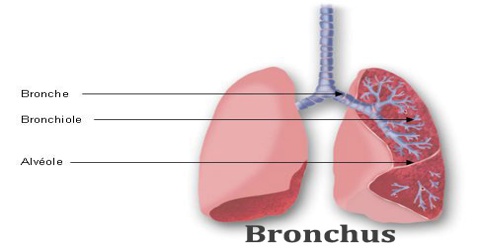 Breathing is the method by which the human body exchanges oxygen from the environment with carbon dioxide within the body. This is a major function of the respiratory system, and the organs that are responsible for the exchange of these gases are the lungs.

The bronchi become smaller the closer they get to the lung tissue and are then considered bronchioles. These passageways then evolve into tiny air sacs called alveoli, which is the site of oxygen and carbon dioxide exchange in the respiratory system.

Structure and Functions of Bronchus

The bronchi divide first into lobar bronchi and then tertiary bronchi. These vessels become progressively smaller as they divide into bronchioles, terminal bronchioles, respiratory bronchioles, alveolar sacs, and finally into the alveoli where the exchange of oxygen and carbon dioxide takes place. The bronchi are made up of smooth muscles with walls of cartilage giving them stability. Cartilage is a connective tissue that provides support for physical processes, and in this case, it prevents the collapsing of the bronchi during inhalation and exhalation. This is important, since air conduction involves pressure that can damage soft tissue if not protected. The mucosal lining produces mucous, which is a thick, semi-liquid substance designed to trap foreign particles from entering the lungs.

Primary bronchi are located in the upper portion of the lungs, with secondary bronchi near the center of the lungs. Tertiary bronchi are located near the bottom of these organs, just above the bronchioles. The right main bronchus is shorter and more vertical than the left, approximately 2.5 m (around 1 inch) in length. It divides into smaller bronchi to enter the three lobes of the right lung. The left bronchus is smaller and longer than the right main bronchus (approximately 5 cm or 1.5 inches.) It, in turn, divides into two lobar bronchi which enter the two lobes of the left lung.

The bronchi function as a passageway for air to travel from the mouth and trachea, down to the alveoli, and back out to the environment. Though the bronchi have been thought of simply structural parts of the body for a long time. Bronchitis sufferers also tend to have much more mucus and phlegm than someone without inflamed bronchi.