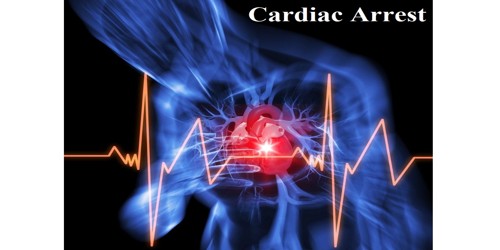 Cardiac Arrest occurs when the heart suddenly stops beating. It is the abrupt loss of heart function in a person who may or may not has been diagnosed with heart disease. This can be caused by a heart attack in which the heart’s demand for oxygen is not met and the heart muscle begins to die. It can come on suddenly, or in the wake of other symptoms.

Cardiac arrest may be caused by irregular heart rhythms, called arrhythmias. With cardiac arrest, normal circulation of blood stops, because of a failure of the heart to contract. The condition usually results from an electrical disturbance in your heart that disrupts its pumping action, stopping blood flow to your body. This causes you to fall unconscious and stop breathing. This results in the body not getting enough oxygenated blood, which causes cells to start to die from oxygen starvation. The most common cause of a cardiac arrest is a life-threatening abnormal heart rhythm called ventricular fibrillation (VF). Cerebral hypoxia (lack of oxygen to the brain) makes a person lose consciousness and stop breathing, and this makes the heart stop completely. Unless the person is in hypothermia, brain damage usually occurs after three to five minutes. (In some cases, the person is put into hypothermia on purpose, to help the person recover better with less damage.)

Cardiac arrest is a medical emergency. It is an extremely serious health issue. With fast, appropriate medical care, survival is possible. If it is treated early enough, some of the damage done can be reversed in certain groups of patients. When cardiac arrest leads to a person’s death, this is called sudden cardiac death (SCD). First aid treatment for cardiac arrest usually begins with cardiopulmonary resuscitation (CPR) to keep oxygenated blood flowing until medical treatment is available. Immediate response and treatment can save a life.