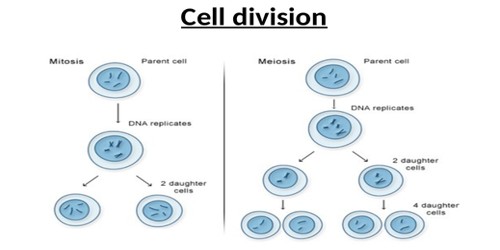 Cell division is the process by which a cell, called the parent cell, divides into two cells, called daughter cells. It is the process cells go through to divide. When the cell divides, everything inside it divides also. The nucleus and the chromosomes divide, and the mitochondria divide also. It usually occurs as part of a larger cell cycle.

In mitosis, an ordinary body (somatic) cell divides to make two daughter cells. Mitosis starts with prophase in which the chromosome is condensed.

In meiosis, a cell divides twice, to produce four gametes (sex cells). It results in four haploid daughter cells by undergoing one round of DNA replication followed by two divisions. The first division of meiosis is a special kind of cell division called a reduction division because the number of chromosomes is halved. The second division of meiosis is similar to mitosis.

It the process by which cells reproduce. Cells are the ‘building blocks’ of life, and cell division is a basic feature of life. The process involves both nuclear division and cytokinesis and can either produce two equal cells or two cells with different cellular fates. For simple unicellular organisms like Amoebozoa, one cell division reproduces the entire organism. On a larger scale, cell division can create offspring from multicellular organisms, such as plants that grow from cuttings. But most importantly, cell division enables organisms that are able to sexually reproduce to develop from the one-celled fertilized egg (zygote). Cell division also allows for continual renewal and repair of the organism.