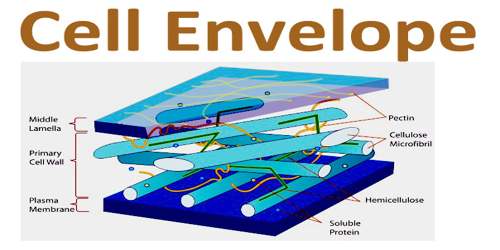 Cell envelope is a combination of the cell membrane, cell wall, and an outer membrane if it is present. Usually, this envelope is a characteristic of prokaryotes like bacteria. Most bacterial cell envelopes fall into two major categories: a gram-positive type and a gram-negative type. These are the envelopes typically found in bacteria staining during a Gram stain. Regardless of its Gram status, a bacterium might have an exterior polysaccharide-containing capsule for further protection of the cell envelope, and is known as a polysaccharide encapsulated bacterium. The bacterial cell surface (or envelope) can vary considerably in its structure, and it plays a central role in the properties and capabilities of the cell. The one feature present in all cells is the cytoplasmic membrane, which separates the inside of the cell from its external environment, regulates the flow of nutrients, maintains the proper intracellular milieu, and prevents the loss of the cell’s contents.

The bacterial cell wall not only maintains the cell shape and prevents it from bursting or collapsing but, as observed in the case of motile bacteria, it forms filamentous extensions called flagella. The bacterial flagellum has three parts – filament, hook, and basal body, with filament being the longest part extending from the cell surface to the outside.

Types and Functions of Cell Envelope

Based on the differences in the envelopes and the manner in which they respond to Gram’s staining procedure, bacterial cells are termed as Gram-positive if they take up the stain and as Gram-negative if they don’t. Thickness and composition of glycocalyx vary among bacterial species. In certain bacteria like pneumonia causing Streptococcus pneumoniae, it is present as a loose sheath known as a slime layer. In others, it is thicker and sturdy known as capsule as found in Pseudomonas aeruginosin. The Gram Negative Cell Envelope: The gram-negative cell wall contains a thin peptidoglycan layer adjacent to the cytoplasmic membrane, which is responsible for the cell wall’s inability to retain the crystal violet stain upon decolourisation with ethanol during Gram staining. Gram negative bacteria have two such double-layered membranes. Each membrane can be divided into an outer and an inner leaflet – a leaflet is a single layer of lipids (such as phospholipids) and two opposing leaflets are needed to make a stable membrane. The outer membrane (OM) – the outermost of the two – is often the surface-most layer of a bacterial cell – the layer that faces the outside world. The inner leaflet is made up of phospholipids (shown in green), like a typical biological membrane, but the outer leaflet is made up of a type of lipid (fat) unique to Gram negative bacteria, called lipopolysaccharide (LPS) – shown in orange. LPS is also called endotoxin, as the bacteria shed some of it into their environment and if they are inside the human body, then the LPS has toxic effects on the human body and is a primary inducer of fever when a person is infected by bacteria such as Salmonella typhi which causes typhoid fever. In nature, many uncultivated Gram-negative bacteria also have an S-layer and a Capsule (microbiology). These structures are often lost during laboratory cultivation.

The Mycobacteria have a cell envelope which is not typical of gram-positives or gram-negatives. The mycobacterial cell envelope does not consist of the outer membrane characteristic of gram-negatives, but has a significant peptidoglycan-arabinogalactan-mycolic acid wall structure which provides an external permeability barrier. The cell envelopes of the bacterial class of mollicutes do not have a cell wall. The main pathogenic bacteria in this class are mycoplasma and ureaplasma. L-form bacteria are strains bacteria that lack cell walls derived from bacteria that normally possess cell walls.

Importance of the Cell Envelope

First of all the cell envelope is protective. It protects against both toxic chemicals and physical trauma. Mechanically, even the envelope of Gram negative bacteria, with a thin peptidoglycan layer, is immensely strong. The envelope must also sense the environment – the envelope of a cell is its interface with the outside world. It does this with specific proteins that are designed to detect and respond to specific signals, such as the presence of nearby food or signals from other bacteria.