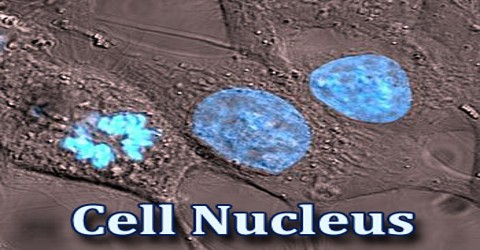 Cell Nucleus is the most noticeable organelle within a eukaryotic cell, and perhaps the most important and defining feature of the eukaryotic cells. The nucleus is not always in the center of the cell. It will be a big dark spot somewhere in the middle of all of the cytoplasm (cytosol). The nucleus is normally around 5-10 μm in diameter in many multicellular organisms, and the largest organelle in the cell. The smallest nuclei are approximately 1 μm in diameter and are found in yeast cells. The main structures making up the nucleus are the nuclear envelope, a double membrane that encloses the entire organelle and isolates its contents from the cellular cytoplasm, and the nuclear matrix, a network within the nucleus that adds mechanical support, much like the cytoskeleton, which supports the cell as a whole. Because the nuclear membrane is impermeable to large molecules, nuclear pores are required to regulate nuclear transport of molecules across the envelope.

Mostly the shape of the nucleus is spherical or oblong. Usually cells have one nucleus but many at times there are multinucleated cells. Multinucleation in cells may be due to karyokinesis, when cell undergoes nuclear division or when cells fuse to form syncytium, like in mature muscle cells. Structure and Function of the Cell Nucleus

Cell Nucleus roles include regulating all activity such as cellular metabolism and growth in addition to storing and maintaining the cell’s DNA for transcription and replication. The cell nucleus comprises numerous components that help it to fulfil its functions. These include the following:

Nuclear Membrane (nuclear envelope) – The nuclear envelope, otherwise known as nuclear membrane, consists of two cellular membranes, an inner and an outer membrane, arranged parallel to one another and separated by 10 to 50 nanometres (nm). The nuclear envelope completely encloses the nucleus and separates the cell’s genetic material from the surrounding cytoplasm, serving as a barrier to prevent macromolecules from diffusing freely between the nucleoplasm and the cytoplasm. The outer and inner membrane of the nucleus is also joined at nuclear pores which regulate the passage of materials between the nucleus and cutoplasm. The inner nuclear membrane has a mesh on its lining which is made of lamin proteins that bind to nuclear components such as chromatin – this is for structural support and possibly has a role in directing materials to the nuclear pores for export.

Nuclear Pore – Nuclear pores are openings in the nuclear membrane that are a pathway for molecules to pass in and out of the nucleus and across the membrane. Molecules can include proteins and ribonucleic acid (RNA) involved in gene expression and support for chromosomes.

Chromosomes – There is nearly 6 foot of cellular DNA in the nucleus of every human cell – this DNA is packaged into 46 chromosomes, each approximately 1.5 inches long. The DNA forms a complex with numerous packaging proteins to form a precise and compact fiber called chromatin. Chromatin has subunits called nucleosomes which can either be lightly packed or tightly packed.The chromatin fibers usually further fold and the DNA condenses at least by 10,000 times itself onto itself to form chromosomes.

Nucleolus – Nucleolus is the most prominent sub-structure in the nucleus. It is the location where ribosomes are synthesized in the cell via the transcription and processing of ribosomal RNA (rRNA).