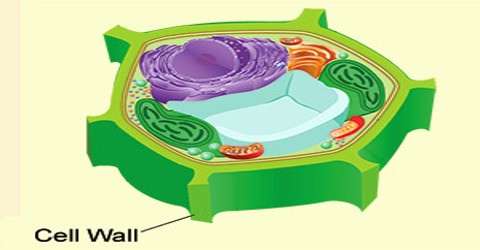 The cell wall is a protective layer outside the cell membrane that also provides support for the cell’s structure. It is the outermost layer of cells in plants, bacteria, fungi, and many algae that gives shape to the cell and protects it from infection. In plants, the cell wall is made up mostly of cellulose, determines tissue texture, and often is crucial to cell function. A cell is the smallest part of an organism that still contains that organism’s elements. The word itself comes from the Latin cella, meaning “small room.” Although the word is found prior to the 12th Century, its application to a cell didn’t come about until 1845, and the idea of a plant’s cell wall came about in 1848. Animal cells do not have such a cell wall, but instead have a membrane that serves as a boundary for the cell.

Cell walls serve similar purposes in those organisms that possess them. They may give cells rigidity and strength, offering protection against mechanical stress. In multicellular organisms, they permit the organism to build and hold a definite shape (morphogenesis). Cell walls also limit the entry of large molecules that may be toxic to the cell. They further permit the creation of stable osmotic environments by preventing osmotic lysis and helping to retain water. Their composition, properties, and form may change during the cell cycle and depend on growth conditions.

Structure and Function of Cell Wall

The plant cell wall is composed of cellulose. Cellulose is a structural carbohydrate and is considered a complex sugar because it is used in both protection and structure. The plant cell wall consists of three layers. Each layer has its own unique structure and function. The layers may vary depending on the type of plant and its needs. Many protists and bacteria produce other cell surface structures apart from cell walls, external (extracellular matrix) or internal. Many algae have a sheath or envelope of mucilage outside the cell made of exopolysaccharides. Diatoms build a frustule from silica extracted from the surrounding water; radiolarians, foraminiferans, testate amoebae and silicoflagellates also produce a skeleton from minerals, called test in some groups. Many green algae, such as Halimeda and the Dasycladales, and some red algae, the Corallinales, encase their cells in a secreted skeleton of calcium carbonate. In each case, the wall is rigid and essentially inorganic. It is the non-living component of cell. Some golden algae, ciliates and choanoflagellates produce a shell-like protective outer covering called lorica. Some dinoflagellates have a theca of cellulose plates, and coccolithophorids have coccoliths.

An extracellular matrix is also present in metazoans. Its composition varies between cells, but collagens are the most abundant protein in the ECM. The cell wall gives the plant its actual shape. It acts as a gatekeeper, because it determines what can come in and out of the cell in order to keep the cell protected. Below are the functions of cell wall: