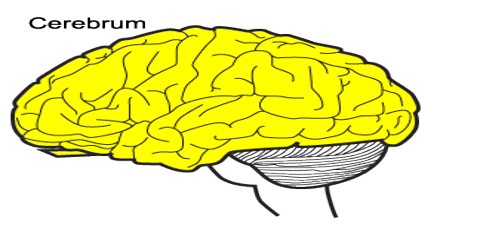 Cerebrum is the largest part of the vertebrate brain, filling most of the skull and consisting of two cerebral hemispheres divided by a deep groove and joined by the corpus callosum, a transverse band of nerve fibers. It is the seat of reason, planning, memory, and sensory integration. All conscious thought originates in the cerebrum and can influence the subconscious functions of the lower regions of the brain. The cerebrum processes complex sensory information and controls voluntary muscle activity. Structure and Functions of Cerebrum

The cerebral hemispheres consist of an inner core of myelinated nerve fibres, the white matter, and an outer cortex of gray matter. The cerebral cortex is responsible for integrating sensory impulses, directing motor activity, and controlling higher intellectual functions. The human cortex is several centimetres thick and has a surface area of about 2,000 square cm (310 square inches), largely because of an elaborate series of convolutions; the extensive development of this cortex in humans is believed to distinguish the human brain from those of other animals. The four lobes are the occipital, temporal, frontal, and parietal lobes, although each lobe has a different task to perform, they all must work together. The occipital lobe, found in the back of our cerebrum, plays a role in processing visual information. There are two temporal lobes, one in each hemisphere. It primarily functions in auditory processing. However, it may also be involved in emotion, learning, and pronunciation/learning a new language. The frontal lobe allows solving a complex task, undergoing voluntary movement of our body parts, forming complete sentences, and is responsible for our personality traits. The parietal lobe functions in general sensation and feeling. The parietal lobe is found in between the frontal and occipital lobe. In the developing vertebrate embryo, the neural tube is subdivided into four unseparated sections which then develop further into distinct regions of the central nervous system; these are the prosencephalon (forebrain), the mesencephalon (midbrain) the rhombencephalon (hindbrain) and the spinal cord. The prosencephalon develops further into the telencephalon and the diencephalon. The diencephalon develops into the thalamus and hypothalamus, including the optic vesicles (future retina). Birds and fish have a dorsal telencephalon, like all vertebrates, but it is generally unlayered and therefore not considered a cerebral cortex. Only a layered cytoarchitecture can be considered a cortex.