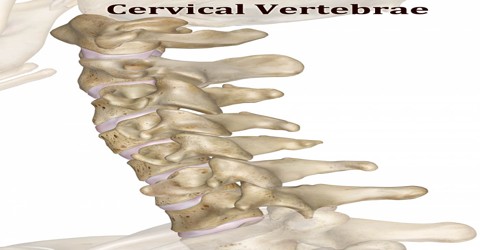 Cervical Vertebrae have cylindrical bones that lie in front of the spinal cord and stack up one on top of the other to make one continuous column of bones in the neck. The atlas is the first cervical vertebra (C1) and it forms the atlanto-occipital joint with the occipital bone, at the base of the skull. This joint allows the head to rock backwards and forwards.  The second cervical vertebra is called the axis (C2) and the joint it forms with the atlas allows the head to rotate and tilt. Thoracic vertebrae in all mammalian species are those vertebrae that also carry a pair of ribs, and lie caudal to the cervical vertebrae. Further caudally follow the lumbar vertebrae, which also belong to the trunk, but do not carry ribs. In reptiles, all trunk vertebrae carry ribs and are called dorsal vertebrae.

Cervical Vertebrae are curved towards the front, which is called the cervical lordosis. These vertebrae support the head, but also protect the spinal cord and its nerve roots that emerge from it, essentially spreading to innervate the neck and upper limbs. This section is made up of seven cervical vertebrae, with the first two forming the superior cervical spine, called the atlas and axis. These are the smallest of the true vertebrae, and can be readily distinguished from those of the thoracic or lumbar regions by the presence of a foramen (hole) in each transverse process, through which the vertebral artery passes.

Structure and Functions of Cervical Vertebrae