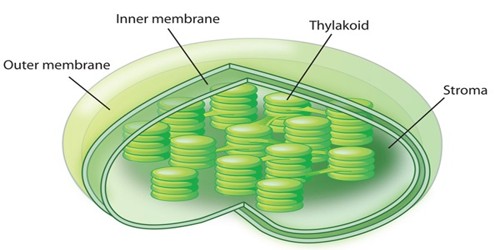 Animal cells do not have chloroplasts. They are only present in photosynthetic cells like plant cells and algae. They contain the molecule chlorophyll, which absorbs sunlight for photosynthesis. In addition to chlorophyll, a chloroplast uses carbon dioxide (CO2) and water (H2O) to form sugar and gives off oxygen (O2). It absorbs sunlight and uses it in conjunction with water and carbon dioxide gas to produce food for the plant. The purpose of the chloroplast is to make sugars that feed the cell’s machinery. Chloroplasts also contain various yellow and orange pigments to assist in photon capture for photosynthesis. They are essential for the growth and survival of plants and photosynthetic algae.

Each chloroplast is surrounded by a double-walled semi-permeable membrane which collectively known as peristromium. In the layered stacks are flat disk-shaped thylakoids. They found in higher plants are generally biconvex or planoconvex shaped. They contain light-absorbing pigments, including chlorophyll and carotenoids, as well as proteins that bind the pigments. They can be found in the cells of the mesophyll in plant leaves. In this respect, they are similar to mitochondria but are found only in plants and Protista. Like mitochondria, chloroplasts also contain their own DNA and ribosomes. 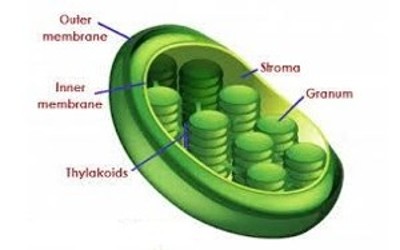 Chloroplasts are one of the many different types of organelles in the cell. Like mitochondria, chloroplasts likely originated from an ancient symbiosis, in this case when a nucleated cell engulfed a photosynthetic prokaryote. They are thought to have originated as endosymbiotic cyanobacteria. This was first suggested by Mereschkowsky in 1905 after an observation by Schimper in 1883 that chloroplasts closely resembled cyanobacteria. Almost all chloroplasts are thought to derive directly or indirectly from a single endosymbiotic event.