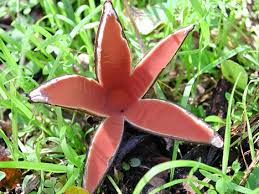 Chorioactis is a genus of fungus that contains the single species Chorioactis geaster. The mushroom is commonly known as the devil’s cigar or the Texas star in the United States, while in Japan it is called kirinomitake. This extremely rare mushroom is notable for its unusual appearance and disjunct distribution: it is found only in select locales in Texas and Japan. The fruit body, which grows on the stumps or dead roots of cedar elms (in Texas) or dead oaks (in Japan), somewhat resembles a dark brown or black cigar before it splits open radially into a starlike arrangement of four to seven leathery rays. The interior surface of the fruit body bears the spore-bearing tissue known as the hymenium and is colored white to brown, depending on its age. The fruit body opening can be accompanied by a distinct hissing sound and the release of a smoky cloud of spores.

Fruit bodies were first collected in Austin, Texas, and the species was named Urnula geaster in 1893; later it was found in Kyushu in 1937, but the mushroom was not reported again in Japan until 1973. Although the new genus Chorioactis was proposed to accommodate the unique species a few years after its original discovery, it was not until 1968 that it was accepted as a valid genus. Its classification has also been a source of confusion. Historically, Chorioactis was placed in the fungus family Sarcosomataceae, despite inconsistencies in the microscopic structure of the ascus, the saclike structure in which spores are formed. Phylogenetic analyses of the past decade have clarified the fungus’s classification: Chorioactis, along with three other genera, make up the family Chorioactidaceae, a grouping of related fungi formally acknowledged in 2008. In 2009, Japanese researchers reported discovering a form of the fungus missing the sexual stage of its life cycle; this asexual state was named Kumanasamuha geaster.

Historically, Chorioactis was considered to be in the family Sarcosomataceae. A 1983 monograph on the family included Chorioactis in the tribe Sarcosomateae (along with the genera Desmazierella, Sarcosoma, Korfiella, Plectania, and Urnula), a grouping of fungi characterized by having spores lacking small wartlike projections (verruculae) capable of absorbing blue dye. A 1994 study of the structural features of the asci and the ascospores concluded that Chorioactis was more closely aligned with the Sarcoscyphaceae, although it conceded that the layering of the cells comprising the walls of the ascus differed considerably from the other members of the family. It was not until 1999 that the results of phylogenetic analysis firmly challenged the traditional classification, showing C. geaster to be part of a distinct lineage, or clade, that includes species in the genera Desmazierella, Neournula, and Wolfina, taxa that were distributed among both families. This analysis was later corroborated when it was shown that the grouping of these four genera (by then called the “Chorioactis clade”) represented a sister clade to the Sarcosomataceae, and a new family, the Chorioactidaceae, was erected to contain them. Although C. geaster shares some characteristics with the other Chorioactidaceae genera, including dark-colored superficial “hairs” on the outer surface of the fruit bodies, it is distinguished from them by its tan to orange (rather than black) hymenia.