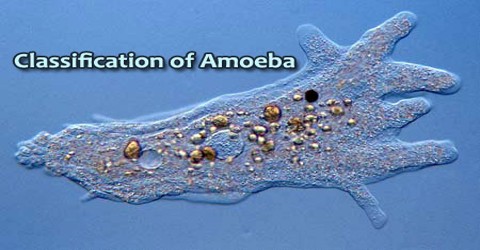 An amoeba (pronounced a-meeba) is a classification of protist that are amorphous in shape, meaning their body has no fixed structures. Amoebas do not form a single taxonomic group; instead, they are found in every major lineage of eukaryotic organisms. Amoeboid cells occur not only among the protozoa, but also in fungi, algae, and animals. There are actually quite a few different species of amoeba, but since they have no fixed shape, they can be really difficult to tell apart. Some of the more common species are –

Amoeba Proteus – named after Proteus, a Greek god who could shape-shift and change the nature of the seas,

Chaos Species – giant amoebas that range from 1-5mm but are not dangerous to humans,

Naegleria Fowleri, (cue sinister music) – these can lead to deadly infections of the human brain.

Amoeba can essentially change their internal cytoplasmic viscosity (or thickness) so that they ooze in a specific direction, forming little finger-like pseudopodia, which they then solidify and pull their rear towards. The various systems of classifying organisms, including amoebae, were based on similarities in observable characteristics and morphology. “There isn’t actually a coherent group of organisms called the amoebae “. Rather, amoebae are any protozoan cells that move by crawling.

Amoebas belong to the domain eukarya, the kingdom protist, the phyllum protozoa, the class rhizopoda, the order amoebida and the family amoebidae. This is the scientific classification of the genus amoeba, which includes many species of amoeba. The classification of living things in biology is called the taxonomy, nomenclature or scheme. Amoeba proteus is a representative example of the species, whose members are characterized by an amorphous shape and a method of propulsion facilitated by a feature called the pseudopod. This feature of the amoeba is also instrumental for feeding. All protists, the amoeba included, are single-celled animals containing a nucleus.

Amoebas are extremely sensitive to stimuli, which are evident from shrinkage or expansion of the cells, depending on the surrounding condition. As for maintaining the osmotic pressure inside the cells, the vacuoles are responsible for the same. When an Amoeba is kept in a hypertonic saline solution (concentrated), the cell shrinks and prevents entry of salt. On the contrary, when it is exposed to hypotonic freshwater, Amoeba cell expands and swells. Coming to the taxonomy of this organism, it is often vague and confusing since Amoeba lacks characteristic morphological features. It is also partly due to the fact that many other species of protists resemble this unicellular eukaryote in their anatomy and behavior. One of the distinctive features that distinguish marine Amoeba from that of the freshwater species is the lack of contractile vacuoles and their enzymes.

The size of amoeboid cells and species is extremely variable. The marine amoeboid Massisteria voersi is just 2.3 to 3 micrometres in diameter, within the size range of many bacteria. At the other extreme, the shells of deep-sea xenophyophores can attain 20 cm in diameter.

Molecular phylogenetics changed the course of taxonomic classification for eukaryotes especially. By comparing the similarities and differences in particular DNA sequences within organisms, scientists were able discern how closely they were related.

As Amoeba is one of the simplest forms of eukaryotic organisms on Earth, it is often considered as a representative organism in the process of evolution.