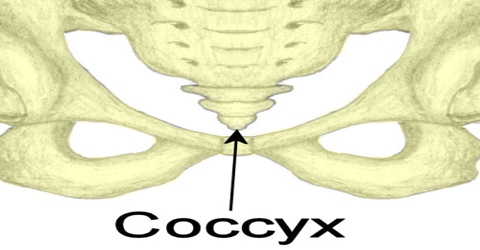 Coccyx is a small triangular bone at the base of the spine in humans and apes. It is composed of several fused vertebrae. It is also called tailbone. It comprises three to five separate or fused coccygeal vertebrae below the sacrum, attached to the sacrum by a fibrocartilaginous joint, the sacrococcygeal symphysis, which permits limited movement between the sacrum and the coccyx. The vertebrae may be fused together to form a single bone; however, in some cases, the first vertebra is separate from the others.

The name “coccyx” comes from the Greek word meaning “cuckoo” referring to the beak-like curved shape of the coccyx, which points towards the front of the body.

Structure and Functions of Coccyx

Coccyx is made up of three small, loosely fused bones that are attached to the sacrum and located just above the cleft of the buttocks. It is sometimes called the ‘tailbone’ because it’s considered the remnant of the full tail of our ape-like ancestors. The coccyx is connected to the sacrum by means of an amphiarthrodial joint. This is a type of joint that functionally only allows for a slight amount of movement. The sacrococcygeal symphysis is supported by 5 ligaments:

The coccyx serves as an attachment site for tendons, ligaments, and muscles. It also functions as an insertion point of some of the muscles of the pelvic floor. The coccyx also functions to support and stabilize a person while he or she is in a sitting position. Many important ligaments attach to the coccyx: the anterior and posterior sacrococcygeal ligaments are the continuations of the anterior and posterior longitudinal ligaments that stretches along the entire spine. Additionally, the lateral sacrococcygeal ligaments complete the foramina for the last sacral nerve. And, lastly, some fibers of the sacrospinous and sacrotuberous ligaments  also attach to the coccyx.