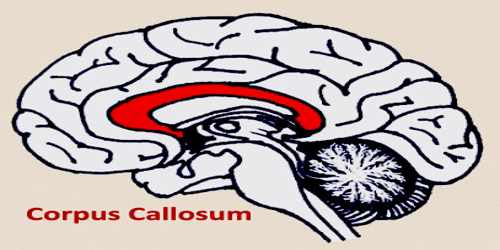 Corpus callosum is the transverse band of nerve fibers that connects the right and left cerebral hemispheres. It is also called callosal commissure, which is a wide commissure, a flat bundle of commissural fibers, about 10 cm long beneath the cerebral cortex in the brains of placental mammals. It is the largest white matter structure in the human brain, consisting of 200–250 million axonal projections. The axons and dendrites of the neurons in the corpus callosum synapse with cortical neurons on symmetrically related points of the hemispheres. Thus, electrical stimulation of a point on one hemisphere usually gives rise to a response on a symmetrically related point on the other, by virtue of these callosal connections. The neurons in the corpus callosum also are insulated by a myelin sheath, which facilitates the rapid conduction of electrical impulses between the hemispheres. Structure and Functions of Corpus Callosum

The corpus callosum is the largest collection of white matter within the brain, and it has high myelin content. Myelin is a fatty, protective coating around nerves that facilitates quicker transmission of information. White matter should not be confused with gray matter. The brain uses gray matter for computation, thinking, memory storage, and more. White matter, like the corpus callosum, allows different parts of the brain to communicate with each other. Thinner axons in the genu connect the prefrontal cortex between the two halves of the brain; these fibres arise from a fork-like bundle of fibers from the tapetum, the forceps anterior.

Corpus callosum is the largest fiber bundle in the brain, containing nearly 200 million axons. It is composed of white matter fiber tracts known as commissural fibers. It is involved in several functions of the body including:

The corpus callosum plays an important role in vision by combining the separate halves of our visual field, which process images separately in each hemisphere. It also allows us to identify the objects we see by connecting the visual cortex with the language centers of the brain. In addition, the corpus callosum transfers tactile information (processed in the parietal lobes) between the brain hemispheres to enable us to locate touch. Some congenital (birth) defects include a complete lack of this neural tissue. In modern neurosurgery, some surgeons have surgically cut the corpus callosum as a means for treating epileptic seizures. By disrupting contact between the two brain hemispheres, a seizure can be isolated and kept from spreading.