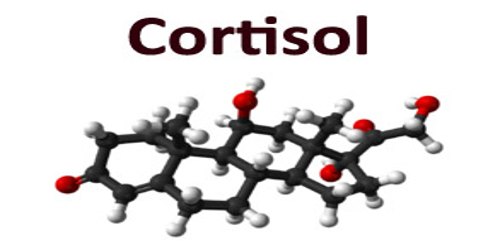 Cortisol is the principal steroid hormone produced by the adrenal cortex. It regulates carbohydrate metabolism and the immune system and maintains blood pressure. When natural or synthetic cortisol is used as a pharmaceutical, it is also known as hydrocortisone. It functions to increase blood sugar through gluconeogenesis, to suppress the immune system, and to aid in the metabolism of fat, protein, and carbohydrates. It also decreases bone formation. Most cells within the body have cortisol receptors. Secretion of the hormone is controlled by the hypothalamus, the pituitary gland, and the adrenal gland, a combination gland often referred to as the HPA axis.

Cortisol belongs to a group of hormones called glucocorticoids. As a group, these hormones are involved in the regulation of metabolism in the cells, and they also help us regulate various stressors on the body. Cortisol, also known as hydrocortisone, cortisone and corticosterone are all glucocorticoids.

Cortisol’s main function is to provoke the cell to manufacture glucose from proteins and fatty acids. This process is known as gluconeogenesis. What cortisol is doing is saving glucose for the brain and forcing the body to use fatty acids from stored fat as energy. It is produced in the human body by the adrenal gland in the zona fasciculata, the second of three layers comprising the adrenal cortex. The cortex forms the outer “bark” of each adrenal gland, situated atop the kidneys. The release of cortisol is controlled by the hypothalamus, a part of the brain. The secretion of corticotropin-releasing hormone by the hypothalamus triggers cells in the neighboring anterior pituitary to secrete another hormone, the adrenocorticotropic hormone (ACTH), into the vascular system, through which blood carries it to the adrenal cortex. ACTH stimulates the synthesis of cortisol, glucocorticoids, mineralocorticoids, and dehydroepiandrosterone.

Cortisol also forces the breakdown of stored proteins into amino acids so that the body can use them for making enzymes or repairing cells. Cortisol increases blood pressure, which increases blood flow and distributes the glucose and other nutrients as quickly as possible to the cells. Finally, cortisol helps the body resist stress and reduces the inflammatory response as well as overall immune response in the body.

Addison’s disease is caused by damage to the adrenal cortex. This condition can lead to the hyposecretion of cortisol. Not enough cortisol affects the function of many systems in the body. Persons affected by Addison’s disease have low glucose and sodium levels in their blood and increased potassium. They also tend to lose weight. Addison’s disease can also cause low blood pressure and dehydration. Cortisol deficiency is usually treated by corticosteroid replacement therapy to return cortisol to normal levels in the body. Cortisol also plays an important, but indirect, role in liver and muscle glycogenolysis, the breaking down of glycogen to glucose-1-phosphate and glucose. This is done through its passive influence on glucagon. Additionally, cortisol facilitates the activation of glycogen phosphorylase, which is necessary for epinephrine to have an effect on glycogenolysis.