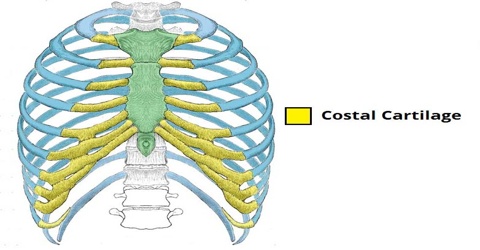 Costal cartilage is the cartilage forming the anterior continuation of a rib, providing the means by which it reaches and articulates with the sternum. Costal (cost- = rib) cartilage also connects the three superior false ribs to the sternum, but these false ribs are attached indirectly by way of the seventh true rib’s cartilage band. It is only found at the anterior ends of the ribs, providing medial extension. Cartilage is a specialized, fibrous connective tissue present in adults, and forming most of the temporary skeleton in the embryo, providing a model in which most of the bones develop, and constituting an important part of the organism’s growth mechanism; the three most important types are hyaline cartilage, elastic cartilage, and fibrocartilage.

The costal cartilage are segments of cartilage that connect the sternum to the ribs and help to extend the ribs into a forward motion. This cartilage also contributes to elasticity within the walls of the thorax, allowing the chest to expand during respiration. There are twelve costal cartilage sections.

Structure and Functions of Costal Cartilage The anterior surface is convex, and looks forward and upward: that of the first gives attachment to the costoclavicular ligament and the subclavius muscle; those of the first six or seven at their sternal ends, to the pectoralis major. The posterior surface is concave, and directed backward and downward; that of the first gives attachment to the sternothyroideus, those of the third to the sixth inclusive to the transversus thoracis muscle, and the six or seven inferior ones to the transversus abdominis muscle and the diaphragm.

The costal cartilage forms a semi-movable joint between the true ribs and the sternum. This joint permits flexibility in the rib cage while keeping the ribs firmly connected to the sternum. The flexibility of the costal cartilage allows the ribcage to expand along with the lungs during deep inhalation. It also allows the thoracic region to bend laterally, anteriorly, and posteriorly. It may also become inflamed in a condition known as costochondritis. Costochondritis causes chest pain, which is not life threatening but may be confused with a symptom of a heart attack. As with a rib separation, the body will repair costochondritis and symptoms will go away on their own.