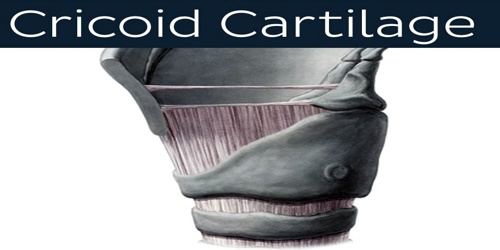 Cricoid cartilage is the ring-like formation at the base of the larynx. It is the only complete ring of cartilage around the trachea. It forms the back part of the voice box and functions as an attachment site for muscles, cartilages, and ligaments involved in opening and closing the airway and in producing speech.

Cricoid cartilage increases its size as it goes posteriorly. Anterior size is the narrowest measuring 0.5 cm. laterally, it increases to 1 cm. The lamina is the broadest measuring about 2.5 cm. Gastric reflux could cause aspiration if this is not done considering the general anesthesia can cause relaxation of the gastroesophageal sphincter allowing stomach contents to ascend through the esophagus into the trachea.

Structure and Functions of Cricoid Cartilage

Cricoid cartilage has a circular ring-like structure. The word “Cricoid” is derived from the Greek term “krikoeides” which means “ring-shaped”. It is located slightly below the thyroid cartilage, which it connects with through the medial cricothyroid ligament. It also joins the first tracheal ring through the cricotracheal ligament. The thyroid gland has an anatomical relationship with this cartilage. The gland’s two lobes extend above on either sides of the cricoid, but the thyroid isthmus a bridge of tissue that joins the two halves of the thyroid over the trachea is below it. The lateral (side) and front portions of this cartilage are slightly narrower than the back portion. Cricoid cartilage is composed of hyaline, which is soft and flexible in young people. However, it calcifies and hardens as it progresses in age. The cartilage may be surgically removed in rare cases where it becomes necessary to clear tracheal blockages.