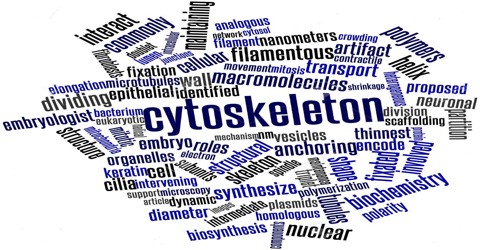 Cytoskeleton is an organelle that forms a lattice or internal framework of a cell. It is composed of protein filaments and microtubules. It extends throughout the cytosol, from the nucleus to the plasma membrane. Its primary function is associated with cell shape, division, differentiation, intracellular organization, and cell movement. It occurs in all cells of living things, particularly archaea, bacteria, and eukaryotes. Structure and Function of Cytoskeleton Of the three types of protein fibers in the cytoskeleton, microfilaments are the narrowest. They have a diameter of about 7 nm and are made up of many linked monomers of a protein called actin, combined in a structure that resembles a double helix. Because they are made of actin monomers, microfilaments are also known as actin filaments. Actin filaments have directionality, meaning that they have two structurally different ends. These have a number of important roles in the cell. For one, they serve as tracks for the movement of a motor protein called myosin, which can also form filaments. Because its relationship to myosin, actin is involved in many cellular events requiring motion.

Actin filaments play key structural roles in the cell. In most animal cells, a network of actin filaments is found in the region of cytoplasm at the very edge of the cell. This network, which is linked to the plasma membrane by special connector proteins, gives the cell shape and structure

Despite the “micro” in their name, microtubules are the largest of the three types of cytoskeletal fibers, with a diameter of about 25 nm. A microtubule is made up of tubulin proteins arranged to form a hollow, straw-like tube, and each tubulin protein consists of two subunits, α-tubulin and β-tubulin.

Microtubules, like actin filaments, are dynamic structures: they can grow and shrink quickly by the addition or removal of tubulin proteins. Also similar to actin filaments, microtubules have directionality, meaning that they have two ends that are structurally different from one another. In a cell, microtubules play an important structural role, helping the cell resist compression forces. The cytoskeleton extends throughout the cell’s cytoplasm and provides a number of important functions.