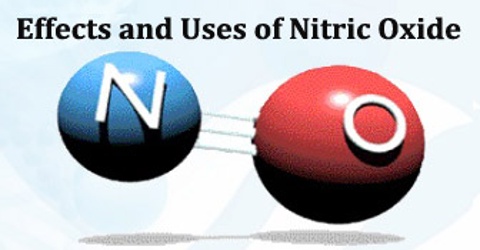 Effects and Uses of Nitric Oxide

Effects and Uses of Nitric Oxide

Nitric Oxide is a chemical compound that has a chemical formula of NO. It consists of one nitrogen (N) atom and one oxygen (O) atom. It is a free radical, which is a group of atoms with unpaired electrons. Nitric oxide is a molecule that our body produces to help its 50 trillion cells communicate with each other by transmitting signals throughout the entire body. Nitric oxide is an important cellular signaling molecule involved in many physiological and pathological processes. It is a powerful vasodilator with a short half-life of a few seconds in the blood. Long-known pharmaceuticals such as nitroglycerine and amyl nitrite were found to be precursors to nitric oxide more than a century after their first use in medicine.

Nitric oxide should not be confused with nitrous oxide (N2O), an anesthetic, or with nitrogen dioxide (NO2), a brown toxic gas and a major air pollutant, the latter being a product to which nitric oxide is rapidly oxidized in air.

Nitric oxide (NO) has led a revolution in physiology and pharmacology research during the last two decades. This labile molecule plays an important role in many functions in the body regulating vasodilatation, blood flow, mitochondrial respiration and platelet function. Nitrate and nitrite are the main substrates to produce NO via the NOS-independent pathway. These anions can be reduced in vivo to NO and other bioactive nitrogen oxides.

If something is taken in excess, no matter how good it is for us, then there are going to be harmful side effects. Some nitric oxide side effects may not need any medical attention. The production of nitric oxide is elevated in populations living at high altitudes, which helps these people avoid hypoxia by aiding in pulmonary vasculature vasodilation. Effects include vasodilatation, neurotransmission, modulation of the hair cycle, production of reactive nitrogen intermediates and penile erections. Nitroglycerin and amyl nitrite serve as vasodilators because they are converted to nitric oxide in the body. The vasodilating antihypertensive drug minoxidil contains an ·NO moiety and may act as an NO agonist. Likewise, Sildenafil citrate, popularly known by the trade name Viagra, stimulates erections primarily by enhancing signaling through the nitric oxide pathway in the penis.

Nitric oxide’s role in regulating blood flow and pressure is utilized by modern medicine in several ways. The drug nitroglycerin has been used since the late 19th century to relieve the condition known as angina pectoris, which is caused by an insufficient supply of blood to the heart muscle. Another medical use of nitric oxide is in the treatment of impotence, or erectile dysfunction, in men. Nitric oxide is essential to the achievement of an erection.

Nitric oxide is an important component of the air pollution generated by automotive engines and thermal power-generating plants. When a mixture of air and hydrocarbon fuel is burned in an internal-combustion engine and a power plant, the ordinarily inert nitrogen in the air combines with oxygen at very high temperatures to form nitric oxide.

People can be exposed to nitric oxide in the workplace by breathing it in. The Occupational Safety and Health Administration (OSHA) has set the legal limit (permissible exposure limit) for nitric oxide exposure in the workplace as 25 ppm (30 mg/m3) over an 8-hour workday. The National Institute for Occupational Safety and Health (NIOSH) has set a recommended exposure limit (REL) of 25 ppm (30 mg/m3) over an 8-hour workday. At levels of 100 ppm, nitric oxide is immediately dangerous to life and health.