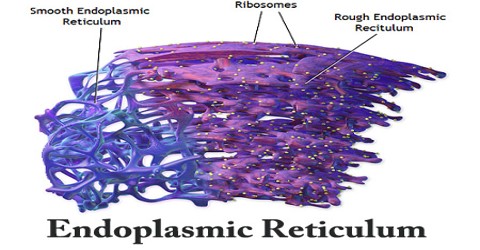 Endoplasmic Reticulum (or ER) is an interconnected network of membranes, which is used to make proteins, steroids, and lipids located near the nucleus. In biology endoplasmic reticulum is a continuous membrane system that forms a series of flattened sacs within the cytoplasm of eukaryotic cells and serves multiple functions, being important particularly in the synthesis, folding, modification, and transport of proteins. There are two kinds of Endoplasmic Reticulum (ER): the RER, or the rough endoplasmic reticulum, and the SER, or the smooth endoplasmic reticulum. The RER bears many ribosomes on its outer surface giving it a rough appearance; hence, its name. Since RER has ribosomes attached to its surface it is therefore involved in protein synthesis and secretion. It synthesizes and secretes serum proteins (such as albumin) in the liver, and hormones (such as insulin) and other substances (such as milk) in the glands. The SER, on the other hand, does not have ribosomes on its surface. Its functions include synthesis of lipids, metabolism of carbohydrates and calcium concentration, drug detoxification, and attachment of receptors on cell membrane proteins. It is also involved in intracellular transport, such as the transport of the products of the RER to other cell parts like Golgi apparatus.

The basic Endoplasmic Reticulum (ER) structure to only those factors that may play a role in changing the shape of ER in response to signaling. The ER consists of the nuclear envelope and the peripheral ER, which includes smooth tubules and rough sheets. While the ER is defined as an interconnected network with a continuous membrane, the different structures that make up the ER perform very diverse and specialized functions within the cell. The nuclear envelope is made up of two lipid bilayers, the inner nuclear membrane (INM) and outer nuclear membrane (ONM), and shares a common lumen with the peripheral ER. Hundreds of nuclear pores spanning the ONM and INM of the nuclear envelope allow transport of molecules, including RNAs and proteins, at various rates of diffusion or regulated transport depending on the size of the molecule. The nuclear envelope is connected to sheets, or cisternae, that make up part of the peripheral ER. ER tubules and sheets are found in all eukaryotic cells, though the ratio of sheets to tubules varies in different cell types and reflects the different functions of these cells. An adrenal, liver and muscle cell are all examples of specialized cells with a predominantly tubular network and reflect the function of these cells.

Endoplasmic Reticulum (ER) serves many general functions, including the folding of protein molecules in sacs called cisternae and the transport of synthesized proteins in vesicles to the Golgi apparatus. Correct folding of newly made proteins is made possible by several endoplasmic reticulum chaperone proteins, including protein disulfide isomerase (PDI), ERp29, the Hsp70 family member BiP/Grp78, calnexin, calreticulin, and the peptidylpropyl isomerase family. Only properly folded proteins are transported from the rough ER to the Golgi apparatus – unfolded proteins cause an unfolded protein response as a stress response in the ER. Disturbances in redox regulation, calcium regulation, glucose deprivation, and viral infection or the over-expression of proteins can lead to endoplasmic reticulum stress response (ER stress), a state in which the folding of proteins slows, leading to an increase in unfolded proteins. This stress is emerging as a potential cause of damage in hypoxia/ischemia, insulin resistance, and other disorders. The functions of smooth endoplasmic reticulum vary in different cell types. More commonly, it is engaged in the synthesis of lipids and steroids. Smooth ER also serves as a storage space for enzymes that detoxify lipid-soluble drugs and other harmful compounds. Smooth endoplasmic reticulum is also involved in the storage of calcium in muscle cells. At the time of need, such as during muscle contraction, this stored calcium is released into the cytosol the liquid inside the muscle cells.

The ribosomes attached to the membrane of rough endoplasmic reticulum play an important role in the synthesis and packaging of proteins. The newly synthesized proteins are discharged and penetrate into the cisternae, where these proteins may be utilized within the cell or may be exported outside the cell to the site of their utility. During the transport of these proteins, three types of membrane ER, Golgi membrane and plasma membrane interact, connecting and disconnecting.