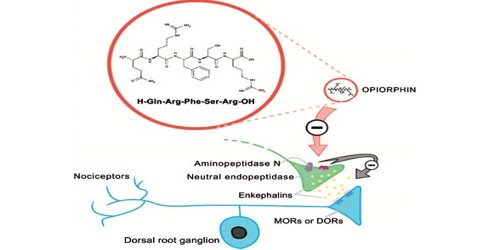 Enkephalins were the first endorphins that were discovered in the brain. They are found in many parts of the brain, especially in the basal ganglia. They act as “natural pain killers”. They are endogenous opioid pentapeptides that are produced mainly in the central nervous system, adrenal medulla, and other peripheral tissues. In the brain, they appear to play the role of the neurotransmitter or neuromodulator of specific neuronal systems that mediate the integration of sensory information related to pain and emotional behavior. In the spinal cord, enkephalins inhibit painful sensations by reacting with specific receptor sites on the sensory nerve endings. They are commonly found throughout the brain and in the spinal cord, but also in nerves outside the brain, the adrenal glands, small and large intestines, kidneys, testes, pancreas, heart muscle, skin tissue, lungs, joints, and bones.

Enkephalins are small proteins. They are found in the thalamus of the brain and in some parts of the spinal cord that transmit pain impulses. They consist of five amino acids in each of their molecules. The last amino acid is either leucine (leu) or methionine (met). There are two structurally different enkephalin peptides: Met-enkephalin (YGGFM), and Leu-enkephalin (YGGFL). They play a role in memory, learning, emotional behavior, and pain.

Enkephalin is a brain neurotransmitter that is formed when tyrosine, glycine, glycine, phenylalanine, and methionine through a condensation reaction or dehydration synthesis. These are generated from a precursor protein called proenkephalin by posttranslational proteolytic cleavage. They are mainly involved in decreasing pain, reducing inflammation, preventing cancer cell growth, and increasing immune cell activity, and play a role in several diseases.