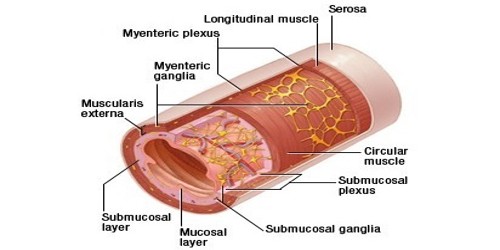 Some treat the ENS as part of the autonomic nervous system.  It contains full reflex circuits for control of intestinal motility, fluid transport, blood flow, and nutrient handling. The principal components of the enteric nervous system are two networks or plexuses of neurons, both of which are embedded in the wall of the digestive tract and extend from esophagus to anus:

It controls these functions in concert with integrating centers in the lower brain stem, sympathetic ganglia, and the spinal cord. It is composed of neurons and glia that modulate many aspects of intestinal function.