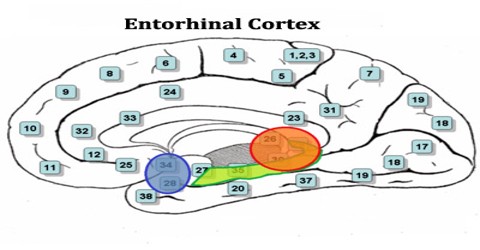 Entorhinal Cortex (EC) is a part of the medial temporal lobe or hippocampal memory system and constitutes the major gateway between the hippocampal formation and the neocortex. It is the main interface between the hippocampus and neocortex. The EC-hippocampus system plays an important role in declarative (autobiographical/episodic/semantic) memories and in particular spatial memories including memory formation, memory consolidation, and memory optimization in sleep. In the entorhinal cortex, the five-layer structure of the ventral temporal cortex gradually merges into the single layer that is found in the dentate gyrus, the innermost edge of the temporal lobe. The entorhinal cortex receives signals from and projects back to the frontal cortex, the insula, and the cingulate cortex, and it is the key brain region funneling input to the hippocampus.

The name entorhinal (inside rhinal) cortex derives from the fact that it is partially enclosed by the rhinal (olfactory) sulcus. Together with the hippocampal formation and neighboring portions of the parahippocampal region it forms a major substrate mediating conscious (declarative) memory.

The entorhinal cortex plays a central role in memory. This region processes and combines memories, most notably during sleep cycles. It also utilizes sensory information to deduce whether a particular sensory event has been experienced previously. From the perspective of neuroanatomy the tissues and structures of the nervous system the entorhinal cortex also holds some major responsibility. It is thought that this cortex retains a neural blueprint of spatial movements. The area has a number of “path cells,” which help an individual navigate clockwise or counterclockwise paths of movement. The superficial layers – layers II and III – of EC project to the dentate gyrus and hippocampus: Layer II projects primarily to dentate gyrus and hippocampal region CA3; layer III projects primarily to hippocampal region CA1 and the subiculum. These layers receive input from other cortical areas, especially associational, perirhinal, and parahippocampal cortices, as well as prefrontal cortex.

In the entorhinal cortex, neurons are grouped into different layers that are characterized by a dominant cell type. Six layers are commonly distinguished, of which layers I and IV are relatively free of neurons. The principal neurons of the entorhinal cortex, i.e., the neurons that are among the main recipients of incoming axons and constitute the major source of entorhinal output to a variety of cortical and subcortical structures, are generally pyramidal cells or modified versions, the so-called stellate cells. These mainly utilize glutamate as an excitatory neurotransmitter. A second group of neurons are the interneurons that mainly provide intrinsic, local connections that use GABA as an inhibitory transmitter. Recently, a third group of excitatory local neurons have been described as well

The accrual of these substances directly impacts the entorhinal cortex’s ability to function properly. In many cases, the entire area atrophies during Alzheimer’s. This process results in major problems of short-term memory preservation, memory consolidation, and spatial navigation. Neurons in the lateral entorhinal cortex exhibit little spatial selectivity, whereas neurons of the medial entorhinal cortex (MEA), exhibit multiple “place fields” that are arranged in a hexagonal pattern, and are, therefore, called “grid cells”.

EC neurons process general information such as directional activity in the environment, which contrasts to that of the hippocampal neurons, which usually encode information about specific places. This suggests that EC encodes general properties about current contexts that are then used by hippocampus to create unique representations from combinations of these properties.