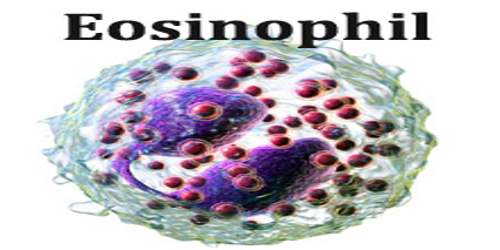 Eosinophil is a type of white blood cell containing cytoplasmic granules that are easily stained by eosin or other acid dyes. It is also called eosinophilic leukocyte, oxyphil, oxyphilic leukocyte. Eosinophils are produced in the bone marrow and migrate to tissues throughout the body. When a foreign substance enters the body, other types of white blood cells (lymphcytes and neutrophils) release substances to attract eosinophils and then release toxic substances to kill the invader. Eosinophils help protect our body from harmful bacteria, as well as from parasites that can steal important nutrients from our body. The numbers of eosinophils in blood often rise when an allergic reaction occurs. Elevated eosinophil counts are also common in some diseases, such as parasite diseases and asthma.

In normal individuals, eosinophils make up about 1–6% of white blood cells, and are about 12–17 micrometres in size. They are found in the medulla and the junction between the cortex and medulla of the thymus, and, in the lower gastrointestinal tract, ovary, uterus, spleen, and lymph nodes, but not in the lung, skin, esophagus, or some other internal organs under normal conditions.

Eosinophils function in several ways. Eosinophils are formed exclusively in the bone marrow where they spend about 8 days in the process of maturation before moving into the blood vessels. They travel through the vessels for 8 to 12 hours before they finally arrive at destination tissues, where they remain for 1 to 2 weeks. Interleukin 5 (IL-5) appears to be the major growth factor for this type of cell. As soon as a parasite enters the body, a chemical signal is sent out that the eosinophils recognize and tells them exactly where the intruders are located. When arriving to the site, one task they can perform is to completely engulf parasites.

The functions of the eosinophil are varied, some of which are very similar to other white blood cells. They are implicated in numerous inflammatory processes, especially allergic disorders.  In addition, eosinophils may have a physiological role in organ formation (e. g. postgestational mammary gland development).