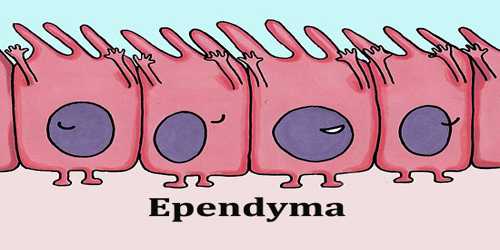 Ependyma is the membrane lining the ventricles of the brain and the central canal of the spinal cord. It is one of the four types of neuroglia in the central nervous system (CNS). It is involved in the production of cerebrospinal fluid (CSF), and is shown to serve as a reservoir for neuroregeneration. Ependymal cells, which create cerebral spinal fluid (CSF), line the ventricles of the brain and central canal of the spinal cord. These cells are cuboidal to columnar and have cilia and microvilli on their surfaces to circulate and absorb CSF. Ependymal cells also give rise to the epithelial layer that surrounds the choroid plexus, a network of blood vessels located in the walls of the lateral ventricles, the two largest ventricles, which occur as a pair in the cerebral hemispheres. Ependymal cells, similar to all other neuroglia, are derived from a layer of embryonic tissue known as neuroectoderm. The basal membranes of these cells are characterized by tentacle-like extensions that attach to astrocytes. Structure and Functions of Ependymal Cell

In the ventricles ependymal cells possess tiny hairlike structures called cilia on their surfaces facing the open space of the cavities they line. The cilia beat in a coordinated pattern to influence the direction of flow of cerebrospinal fluid (CSF), bringing nutrients and other substances to neurons and filtering out molecules that may be harmful to the cells. The ependymal cells in the ventricles are loosely joined together by special intercellular adhesion sites called desmosomes, which enable the cells to form a nearly continuous epithelial sheet over the surface of the ventricles and spinal canal.

Another type of ependymal cell, known as a tanycyte, is found only in the lining on the floor of the third ventricle in the brain. These cells are unique from other ependymal cells in that they have long processes and large “end feet” that connect to brain capillaries and neurons distant from the ventricle. The functions of the ependymal cells are as follows:

Ependymal cells are derived from a layer of embryonic tissue known as neuroectoderm.