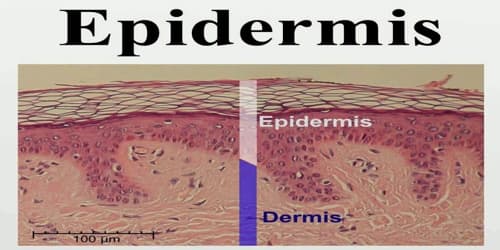 Definition: The epidermis is the outer layer of the three layers that make up the skin, the inner layers being the dermis and hypodermis. It is mostly made up of flat, scale-like cells called squamous cells. Under the squamous cells are round cells called basal cells. The deepest part of the epidermis also contains melanocytes. These cells produce melanin, which gives the skin its color.

The epidermis layer provides a barrier to infection from environmental pathogens and regulates the amount of water released from the body into the atmosphere through transepidermal water loss. The outermost part of the epidermis is composed of multiple layers of flattened cells, that overlies a base layer (stratum basale) composed of columnar cells arranged perpendicularly.

When the epidermis is broken, as in a scrape or a burn, liquid oozes out and quickly clots into a scab. This scab is a mechanical barrier that keeps the tissue from drying out. It also helps keep germs from getting into the body and causing infection. The epidermis contains the brown pigment melanin, a natural sunblock. Melanin absorbs ultraviolet light and prevents it from injuring the DNA.

The other main layer of the skin is the dermis, the inner layer of skin, that contains blood and lymph vessels, hair follicles, and glands. These glands produce sweat, which helps regulate body temperature, and sebum, an oily substance that helps keep the skin from drying out. Sweat and sebum reach the skin’s surface through tiny openings called pores.

Structure and Functions of Epidermis: The epidermis has no blood supply and is nourished almost exclusively by diffused oxygen from the surrounding air. It is 90% keratinocytes (proliferating basal and differentiated suprabasal) but also contains melanocytes, Langerhans cells, Merkel cells, and inflammatory cells. The epidermis is composed of four main strata or layers.

The stratum basale. It is the base or deepest layer of the epidermis. A cell-producing factory, the basale layer contains stem cells which are constantly dividing to make new ones. These fresh new cells make their way up to the stratum corneum to replace those that have sloughed off. This cycle runs on a continual basis, keeping our epidermis healthy and strong.

The stratum spinosum. Keratinocytes become connected through desmosomes and start to produce lamellar bodies, from within the Golgi, enriched in polar lipids, glycosphingolipids, free sterols, phospholipids, and catabolic enzymes. Langerhans cells, immunologically active cells, are located in the middle of this layer.

The stratum granulosum. Keratinocytes lose their nuclei and their cytoplasm appears granular. Lipids, contained into those keratinocytes within lamellar bodies, are released into the extracellular space through exocytosis to form a lipid barrier. Those polar lipids are then converted into non-polar lipids and arranged parallel to the cell surface.

The epidermis is the outermost layer of our skin. Tough and resilient, protection is its number one job. Think of a parka people may wear in the winter. The inside is lined with soft fleece, providing a layer of warmth. But the outside is made of a strong waterproof material that lets nothing through. It is a similar situation with our own epidermis.

The protective qualities of our outer layer are vast. Our epidermis is waterproof, which is why we don’t swell with liquid each time we bathe. The cellular structure of the epidermis also forms a highly effective barrier against germs. When skin is healthy and intact, it is difficult for bacteria and viruses to make an entrance. In addition, cells of the epidermis have the miraculous ability to regenerate or grow back, unlike many other cells in the body. When people suffer from a wound, healthy skin heals and replaces damaged cells with ease.

Epidermal organogenesis, the formation of the epidermis, begins in the cells covering the embryo after neurulation, the formation of the central nervous system. In most vertebrates, this original one-layered structure quickly transforms into a two-layered tissue; a temporary outer layer, the periderm, which is disposed of once the inner basal layer or stratum germinativum has formed.